More on the Ketubah 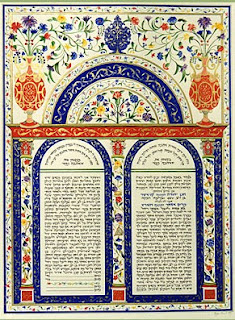 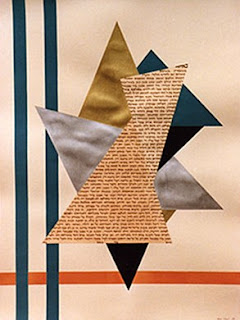 Beautiful pieces of artwork revitalize a four hundred year old Jewish marriage contract tradition, the (ketubah). The ketubah document originated as protection for women against abandonment of their husbands. This ketubah Jewish marriage contract protected women from being discarded by their husbands with no provision for their financial welfare. The modern version of the ketubah has its roots in the Babylonian exile when the elders felt it was necessary to guarantee women legal rights of property and provision in the event that the husband was no longer present for reasons including divorce, desertion or death. The elders had foresight when they enumerated in the groom’s obligations to the bride since the financial consequences of divorce resulted in Jewish families remaining intact. With slight revisions that have occurred throughout the centuries, this ketubah marriage contract remains in use today and is referred to as the Traditional Aramaic. The Orthodox community uses this text exclusively and many other rabbis and couples choose it, as well, as this Aramaic text has stood the test of time. It is also the only Jewish marriage contract text that is recognized as legal in the state of Israel. In modern times the divorce rate has unfortunately risen so high, that the Conservative movement felt compelled to add another paragraph, referred to as the Lieberman Clause, to the Traditional Aramaic text. This states that, in the event of a divorce, the couple agrees to go before the Rabbinic Assembly and abide by their decision regarding the Jewish divorce. If either partner does not comply, they can be taken to a civil court for enforcement of the decree. In essence, the intention was to give the wife a civil remedy if the husband refused to give her a ‘get’ which is a Jewish divorce, an action that would prevent her from entering into another Jewish marriage in the future. The Reform, Reconstructionist, Humanist and unaffiliated members of the Jewish community often prefer to choose the wording for their marriage vows that they relate to personally. Many beautiful and poetic texts have been written to express what the couple’s hopes and expectations are as partners in marriage. Interfaith and Anniversary ketubot are also readily available as well as alternative texts for same gender unions. The history of illuminated ketubot from the many cities and cultures that Jews have abided in spans centuries, though this art form waned when the Jews were persecuted so viciously in Europe, there has been an amazing revival over the last decades. Now, many Judaic artists are inspired to create artwork to enhance the ketubah text. designs range from very traditional to abstract paintings with the ketubot text superimposed over the art.
Laya Crust is a Canadian Artist who was educated in North America as well as Israel. Upon perusing her portfolio I am amazed at the vast styles she displays. One would have to be pretty darn picky not to find something of Laya's to love! 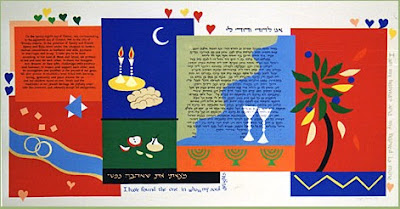