613- A number with much meaning 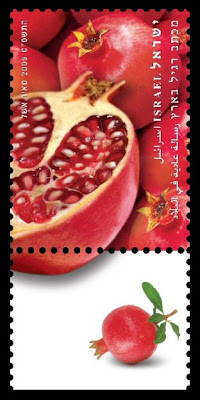 There are 613 commandments or mitzvot

There are (supposedly) 613 seeds in a pomegranate

It is the area code for Ottawa and surrounding Eastern Ontario, Canada.

And with this posting, I now have posted 613 times to Judaica Journal! Thank you my loyal readers- those who have been with me from the beginning and those who have found me today for the first time. May we work together to create 613 (or more) more postings!

And today's beautiful pomegranate stamp is the work of Meir Eshel.
Posted by DrMom at 9:16 AM