When The Timbrels Went Silent... 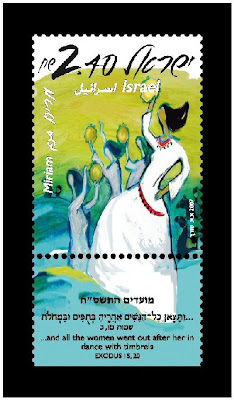 From the studios of Ora & Eliyahu Schwarts a stamp series recognizing women of the Bible arose, including the celebration of Miriam. And from the pen of poet Philip K. Jason, a poem recalling what the loss of Miriam meant to our people and her brother. The poem first published in Midstream, is posted by permission of the author.

When Miriam died,
her timbrel quieted,
her well left dry -
there was no fanfare.

When her brother Aaron died,
the people mourned for 30 days.

Eleazar put on his father’s priestly robes,
but no one took on Miriam’s garments
or sang her songs.

Yes, the water dried up at her death,
and the people complained again
about the folly of leaving Egypt,
but when the Lord commanded
that the words of Moses bring forth
water from the rock, he used the rod
instead and seemed to claim
the miracle as one of his own making.

Moses was left to watch Aaron
die before him, as Miriam had done, –
left alone to lead the people
through further misadventures,
and to end his quest with the generation
that had fled slavery and yet kept
gagging on the bitter gift of freedom.

Moses was left to quench his longing
in a drought – dreaming, perhaps,
of the watery place of his rescue,
when young Miriam had waited by the Nile
watching over little brother in his ark of reeds
Posted by DrMom at 2:27 AM