Were there Phoenixes on the Ark? 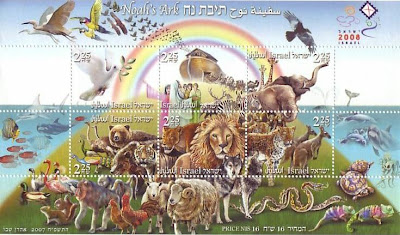 I found a very interesting blog today... HARRY POTTER AND TORAH. Here is a midrash from there along with a 2008 firstday cover of Israel's Noah ark stamp.

Could Fawkes, Dumbeldore's immortal phoenix, have been in the Garden of Eden or on Noah's Ark?Read the answer in the following excerpt from Harry Potter and Torah, which was printed in the Washington Jewish Week last July:
Was Fawkes the Phoenix on Noah's Ark?When we think about Noah collecting the animals to bring into the ark, most of us tend to imagine lions and tigers, cows and rams, and other "regular" animals. After all, Torah does not talk about mythical animals like those found in Harry Potter.Or does it? Might Fawkes the Phoenix have been on Noah's ark?The Talmud tells the following midrashic story about Noah on the ark:"Noah found the phoenix hiding in the bottom of the Ark. He said to it, 'Don't you want food?' It replied, 'I saw you were busy, and did not want to trouble you.' He said to it, 'May it be God's will that you never die.' "The midrash elaborates on the phoenix's immortality as follows: "It lives for a thousand years, and at the end of this thousand years, a fire emerges from its nest and incinerates it. A volume equivalent to an egg is left, which grows limbs and lives." The Prophet Job refers to the phoenix's immortality when he says "Like a phoenix I increase my life's days."So we see the magical phoenix quite clearly in Torah literature! This sounds just like Dumbeldore's explanation to Harry in the middle of Chamber of Secrets (chapter 12):
"Fawkes is a phoenix, Harry. Phoenixes burst into flame when it is time forthemto die and are reborn from the ashes." Interestingly, the same midrash gives a second, very different explanation of the phoenix's immortality: "Eve fed the animals and birds from the Tree of Knowledge. They all listened to her, except for one bird, called the phoenix."Since all people and animals were immortal until eating from the tree of knowledge, the phoenix's not eating from the tree of knowledge meant it would never die.So which is the reason that the midrashic phoenix lives forever? Is it because it did not eat from the tree of knowledge, or because of Noah's blessing?Commentaries on the midrash give two possibilities. One is that the sages simply disagree, that the sage quoted in the midrash attributes the phoenix's longevity to the Garden of Eden, and the sage quoted in the Talmud attributes it to Noah's blessing.The second possibility is that the phoenix's longevity was earned in two stages. It lives a long time, and does not die a natural death like other animals, because it did not eat from the tree of knowledge. Then Noah's blessing added to its immortality, either by giving it the process of rejuvenation by burning up and being reborn, or by giving it Divine protection from hunters and accidents.Many commentaries, however, take all the biblical and midrashic discussions of the phoenix to be metaphorical. The Book of Job, for example, used the bird as a metaphor for long life, and did not refer to actually seeing one. Both the above stories from the midrash can be understood this way, as lessons about the importance of caring for other people's difficulties (the midrash of Noah) and about doing the right thing in the face of a temptation (the midrash of Eve). Each, according to the midrash, merits a lot of Divine reward, metaphorically earning long life or immortality.Other commentaries say that the phoenix is used by our sages as a metaphor for "the soaring of the intellect, which continues even when man's body becomes weak." Others see the phoenix as a metaphor for the Jewish people throughout history, often appearing "burnt up" but always being reborn.All in all, the magical phoenix has left us a lot to think about. Anyone intrigued by the existence of magical animals has no shortage of Torah sources for them. And anyone looking for metaphors for a soaring intellect or the everlasting Jewish people need look no further.But, most important, we see two things that we can think about in our own lives, doing what is right when we're given a temptation not to (as in the story of Eve) and caring that others not work too hard for our own sake (the story of Noah). According to the midrash, these are how immortality is earned, either real or metaphorical. Even without spells or incantations, our own behavior can be as hot as a phoenix.
Posted by DrMom at 8:48 AM