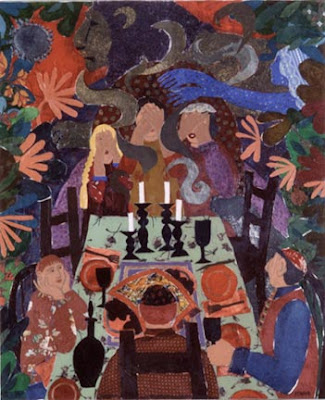 
Lynne Feldman grew up on Manhattan's upper west side. She attended the High School of Music and Art, New York University and has a master's degree in art education from Columbia University. Her formal art training began at the age of 12 at the Art Students League of New York where she continued to study drawing and painting there for the next 15 years.
It was not until 20 years into her career as a painter that Ms. Feldman began to explore Judaic themes in her work. What began as an expression of emotion in response to her grandparents' death became a passion, a profound need to convey Jewish culture on canvas.
Her work has been reproduced in Moment magazine and on the covers of Hadassah and Lilith and Tikkun magazines, and has been used by the United Jewish Appeal, B'nai B'rith and the Simon Wiesenthal Center. Her painting "Purim Dance", commissioned by Temple Beth David in Westwood, Massachusetts, was featured in the recently published book The Jews in America: A Treasury of Art and Literature.
Ms. Feldman's work has been shown at the Skirball Museum in Cincinnati, the Flagler Museum in Palm Beach, and many galleries, universities and JCC's around the country. In 1992, she was award the simon Rockower Award for Illustration in Journalism. Ms. Feldman lives in Rochester, NY with her husband and two children.

Shabbat Shalom.
Posted by DrMom at 9:15 AM