Jews are a Mosaic people in more ways than one! 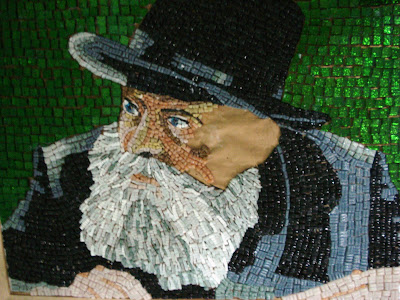 Deca Bannitz has created some phenomnal mosaics. The one to which I was most attracted was this one she displayed on flickr as a work in progress. Although made of glass and stone, the rebbe's expression is full of life.
Deca resides in Brazil. 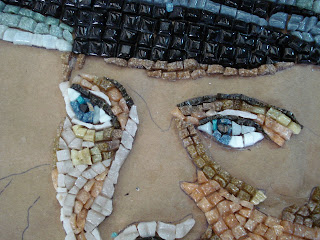 We Jews form a mosaic, don't we? The Jewish Cultural Mosaic certainly thinks we do. Read more abou this on line museum:
For over 2000 years, one people despite the lack of a homeland for most of that time? The answer, in the words of the Broadway musical Fiddler on the Roof, is "tradition." At least until the beginning of modern times, Jews shared a common devotion to the Torah. Torah meant both a set of books (the Five Books of Moses) and a common set of religious norms, laws, and practices that they could carry with them wherever they went. The Torah and its tradition taught Jews that they were descendants of the same ancestors, had been slaves in Egypt, had entered the Holy Land, and then had been expelled because of their sins. Studyof the Torah and the other sacred texts, as well as prayers, were conducted in Hebrew, the shared ancestral language of the Israelites.
The Great Tradition and the Little Tradition Even though Jews felt such strong ties to a common book, a common tradition, and a common ancestry, they differed from each other tremendously. This wasn't only evidence of the truth of the proverb "two Jews, three opinions," it was a result of the fact that the same tradition that held the Jews of the world together also separated them.
Actually 'it wasn't the same tradition. Jewish culture, like all other major traditions, really consists of two parts: the official culture and the folk culture, or, as anthropologists like to put it, the "great tradition" and the "little tradition." The great tradition, written in books and enshrined in the laws of the Jewish religion, was the uniting factor. It stretched back to ancient times and described the very beginning of the Jewish people. It spoke of their heroic common ancestorsAbraham, Isaac, and Jacob; Sarah, Rebecca, Rachel, and Leah. The great tradition had an advantage that was particularly important for the Jews-it was portable. Wherever Jews went, they could take their books with them. Because all Jewish scholars and many Jewish laymen (but not most Jewish women) were literate in the common HebrewrAramaic language, they could read what Jews in other lands wrote with little difficulty. If scholars wrote new works, the manuscripts could make their way to other countries to be copied or printed there. Jews of Yemen studied the Bible and Talmud commentaries of Rashi born in eleventh century France, just as Jews in Poland could study the works of Maimonides, born in twelfth century Spain. Neither time nor place made much difference. Once something was written down and codified, it was made permanent.
Posted by DrMom at 6:12 AM