Recently, I had my own little scare with the BIG C. Something showed on my mammogram which required biopsy. I was blessed and all is well and benign. Now that I am in my 40's I feel that everyone I know is developing cancer, although I know it is an exagerration and a result of not being a spring chicken any longer. Jocelyn Crocker of Chez Pomegranate created this Hamsa for one of her friends. She writes "I made the hamsa for her as a symbol of my family’s love and hope for her recovery. The ribbon in the middle is the symbol for breast cancer. Instead of an eye, I made a stylized breast to represent the flesh my friend had lost to the disease. The colours represent the four elements to keep her grounded with orange being earth and fire, and blue being water and sky. This hamsa has extra meaning for me now as my mother was also diagnosed with breast cancer in April 2007." 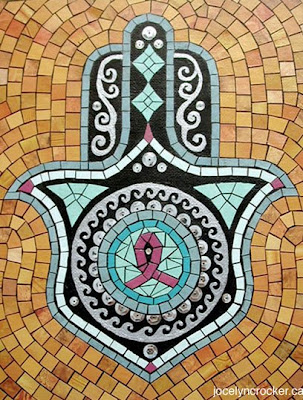 Hundreds of years ago in an Ashkenazic Jewish community a DNA mutation occurred which would have an impact on thousands of Jews in the twentieth century. A Jewish baby conceived from a mutated sperm or egg became the ancestor who transmitted a faulty version of the breast cancer gene, BRCA1, to his or her children and to perhaps dozens of subsequent generations. Today many thousands of Ashkenazic Jewish women and men around the world carry that mutated gene. Most female descendants who have inherited the mutated BRCA1 have developed or will develop breast or ovarian cancer. A mutation in a second gene, BRCA2, arose in the Ashkenazic population as a result of another independent genetic event - occurring at another time and place. Women who have inherited that mutation also have greatly increased risk for breast cancer.

It is estimated that 1 out of every 50 Ashkenazic Jews carries a mutant copy of either BRCA1 or BRCA2. Although other types of mutations in BRCA1 and BRCA2 do exist in the general population, the two specific mutations associated with Ashkenazic Jews have not been found in the non-Jewish population. Most startling is that women who inherit mutant forms of BRCA1 may have up to an 85% risk of contracting breast cancer and a 44% risk of contracting ovarian cancer in their lifetimes. This compares with an overall 12% risk of breast cancer and 1% risk of ovarian cancer in the general population. Read more of this Article from Miriam Wahrman here.
Posted by DrMom at 7:23 AM