Haman’s Swaying Power: Purim and the Image of the Gallows 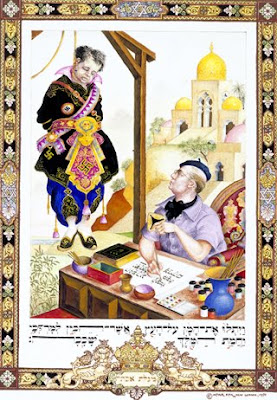 Artist Arthur Szyk (1894–1951) earned an international reputation during his lifetime for his richly detailed illustrations and illuminations of Jewish themes. Szyk was a skillful caricaturist and a passionate crusader for political causes. From his early childhood in the Polish city of Lodz until his death in New Canaan, Connecticut, he drew inspiration from the history of his people. Szyk found strength in biblical stories of Jewish bravery and martyrdom, and in more modern examples of courage.


For most Jews, Purim is simply the most riotous of the Jewish holidays: It’s the innocent, if irreverent, celebration of Jewish survival in the face of an ancient threat of genocide. The rituals of Purim — masquerades, theatrical revelry, song and dance, festive afternoon meals, acts of charity and exchanging gifts — combine the best of Mardi Gras, Thanksgiving and Halloween.

But like those other celebrations, Purim has a dark side — one that has long been ignored, repressed or ritually allegorized by the rabbis. The most popular Hebrew Purim children’s song is all about “masechot, ra’ashanim, shirim ve-rikudim” (“masks, noisemakers, song and dance”). But the favored Purim tune in many Orthodox circles speaks to the festival’s more macabre elements. The lyrics for the yeshiva Purim standard, “Ve-Nahafokh Hu” (“And It Was Upside-Down”), are lifted straight out of that portion of the Megillah from which liberal Jews have tended to avert their eyes: “So the opposite happened, for the Jews themselves overpowered those who hated them” (Esther, 9:1).

This verse is immediately followed by the Megillah’s gruesome account of Jews’ hangings of Haman and his 10 sons, and by their subsequent wholesale massacres of the gentiles of Shushan and its surrounding provinces.

As Elliott Horowitz displays in “Reckless Rites: Purim and the Legacy of Jewish Violence,” his dazzlingly erudite study of the many ramifications of the Purim odyssey from medieval times to our days — when the celebration of Purim has become an excuse for the most violent among the Israeli settlers to abuse, and occasionally murder, their Arab neighbors — the story of Mordecai, Esther and Haman has, over the centuries, accrued the most highly charged symbols of the mutual hatred between Jews and gentiles. While the Megillah’s account of the rivers of blood in which Purim was conceived may have no actual historical basis, its continued recitation has brought many ugly repercussions. Horowitz’s ambitious book achieves two accomplishments: the documentation of 1,500 years of Christian and Jewish interpretations of the knottiest, and naughtiest, sections of the Book of Esther, and then the chronicling of the actual social-historical consequences of those interpretations; that is, how Purim was used and abused through the ages.

On the Jewish side, the problem begins with Haman’s ancestry. He is identified in the Megillah as an Agagite, thus a descendant of the Israelites’ first genocidal enemy, the Amalekites — whom, as God commands, must be remembered and pursued to total extermination. Because of Haman’s nasty lineage, the Sabbath preceding Purim (known as Shabbat Zachor), is dedicated to remembering the treachery of Amalek and the eternal obligation to destroy the “seed of Amalek.” The rabbinic imagination has sown that seed over much of the earth.

More than just the ancestor of Haman, the Biblical Amalek was the grandson of Esau, whom Jews consider the father of Roman Christendom. That is where many of the troubles with Purim, unmasked by Horowitz, deepen. Already in the fifth century, the Jews were conflating the hanging of Haman with the crucifixion of Jesus. And on Purim, they allowed themselves to display publicly their contempt for the gentiles’ Lord and Savior. Hence Emperor Theodorus II’s edict of 408, instructing all his governors to “prohibit the Jews from setting fire to Haman… in a certain ceremony with sacrilegious intent (using) a form made to resemble the saint cross in contempt of the Christian faith.”

For many ceturies after Roman times, Jews continued to behave badly with respect to their neighbors’ religious symbols, as Horowitz documents in a rich chapter on the ways in which Jews expressed their fear and revulsion of the crucifix.

Beginning with Theodorus and ending with Hitler’s 1944 bitter observation that if the Germans lose the war, the Jews will establish a “second triumphant Purim,” Horowitz explains how the holiday was also employed by centuries of Christian clerics to promote antisemitism. We learn that Martin Luther’s hateful comment, in his infamous 1543 essay, “On the Jews and Their Lies,” that “the Jews love the book of Esther, which so well fits their bloodthirsty, vengeful murderous greed,” continued to resonate with German Lutheran and Catholic clerics, even in the aftermath of the Holocaust. In fairness, Horowitz also explores the later tendency of more liberal Christians, such as Methodists and Quakers, to allegorize the Megillah’s disturbing account of mass murder and emphasize its message of hope and salvation.

But among the most fascinating aspects of the intellectual history of Purim is the deep discomfort of many liberal Jewish thinkers with the holiday’s potential promotion of genocide. Leading 19th-century British Reform scholar Claude Montefiore, in an editorial in London’s Jewish Chronicle in March 1888, went so far as to call for Purim’s abolition. But such voices were always a small minority, as most Jews reveled in the story of Purim — massacres and all.

The book is richly illustrated with images of “hanging Hamans” — fanciful displays of Haman and his 10 sons hanging from a tree — that decorated many Megillot and Siddurim since the late Middle Ages. But, as Horowitz notes, such images disappeared rather suddenly from American Jews’ prayer books and scrolls in the early 20th century. He explains that American Jews, repulsed by their country’s deep racism, made manifest most cruelly in the Deep South’s lynching of blacks, had no stomach for the Megillah’s hanging images. Horowitz reminds us that Billie Holiday’s great lament of lynching, “Strange Fruit,” was written by liberal New York Jewish schoolteacher Abe Meeropol.

Lest the reader suspect Horowitz of fanciful speculation on the tensions for American Jews between Purim’s gallows and Georgia’s lynching, his account of Reform rabbi David Einhorn’s sermon for Shabbat Zachor, 1864 — “War With Amalek” — may prove convincing. Their abolitionist rabbi instructed the members of Philadelphia’s Knesseth Israel congregation that the Amalekites of 19th-century America were the Confederate slaveholders. Declaring that “God commands no war against the black color, but against the dark deeds of Amalek,” Einhorn challenged his congregants to ask themselves whether it was “anything else, but a deed of Amalek, a rebellion against God, to enslave beings created in His image, and to degrade them to a state of beasts having no will of their own?”

A century-and-a-half since Rabbi Einhorn’s brave, humanitarian use of the Amalek imagery, Rabbi Shlomo Riskin of the West Bank settlement of Efrat preaches in the opposite spirit, recklessly defining the Palestinians as “the seed of Amalek.” This is a cruel classification extended by Israel’s former chief Sephardic rabbi, Ovadiah Yosef, to Israeli leftist politicians. And in 1990, Baruch Goldstein was “inspired” by his literal reading of the Megillah to massacre 29 Muslims at prayer in Hebron on Purim morning.

Nevertheless, the vast majority of Jews have long neutralized the Torah’s command to wipe out the Amalekites by ritualizing it. When I was a young child in Montreal, my grandfather explained that the mitzvah of “wiping out” Haman’s descendants was best fulfilled by writing the word “Amalek” in Hebrew on the soles of newly purchased shoes and then taking a stroll among our good French neighbors, whom, he assured me, certainly were not Amalekites. Horowitz recounts how another, more famous Montrealer, late novelist Mordecai Richler, recalled observing his grandfather, Rabbi Yudel Rosenberg — who, in addition from being the chief rabbi of Montreal, was a Torah scribe — testing his quills by writing, then immediately crossing out, the word Amalek.

The task, and occasional conceit, of historians, is to present the past as objectively as possible, to fight the foibles of our natural subjectivity by not allowing our personal views to distort our narrative. Achieving such neutrality is a goal that never can be perfectly attained, and it is especially difficult when dealing with such sensitive and potent subjects as those in “Reckless Rites.” Horowitz does not succeed fully in concealing his disdain for Israeli settlers’ bloody abuses of Purim. At the same time, he also scrupulously reports on parallel abuses of the holiday by left-wing American Jews — for example, the hippy Purim shpiel at a California Havurah during the Nixon era, in which the local campus Hillel rabbi impersonated the president’s senior aid, H.R. (Bob) Haldeman, carrying a briefcase with the inscription “H.R. Haman”— and his account of Christian theologians’ antisemitic abuses of the Book of Esther, particularly those of German biblical scholars after the Holocaust, resonates with a deep, quiet anger.

At the end of his introduction, Horowitz writes: “I must confess that many of the hostile comments about the book of Esther that I encountered in the learned tomes that I consulted in some of the world’s great libraries made my blood curdle, and sometimes made my hand shake as I transcribed them. Readers, I suppose, will often hear the jingle-jangle of these discordant voices….”

What this reader kept hearing, rising above those “discordant voices,” was a scrupulously honest voice, dealing in exemplary fashion with an important subject that has been ignored by scholars precisely because of its extreme delicacy. In his execution of narrating the repercussions of Haman’s execution, Horowitz has enriched us with a model of historical scholarship. Anything but reckless, “Reckless Rites” is a rare gem of academic work that will make a real difference.

Allan Nadler, a frequent book reviewer for the Forward, is professor of religious studies and director of the Jewish Studies Program at Drew University.
Posted by DrMom at 9:01 AM