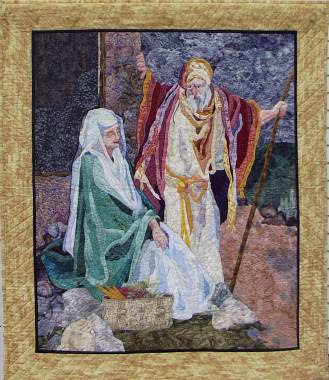 Marilyn Bedford likely does not engage in alcohol consumption while she creates this wonderful quilts. This Brooklyn native began artistic life as a painter but moved to the fiber arts upon happenstance after wondering into a quilting store. These images are from her Mordecai and Esther quilt.

"A person should drink on Purim until the point where they cannot tell the difference between ‘Blessed is Mordechai' and ‘Cursed is Haman.'
Talmud-Megillah 7a/Shulchan Aruch (Code of Jewish Law)

On Purim, one is commanded to drink wine to a point of inebriation. This is usually fulfilled during the course of the festive meal, although many also attempt this on Purim night, as well.

How much should one drink?

The purpose of drinking on Purim is not to get so drunk that one is unable to function. It is generally agreed that the requirement is limited to the point of not impairing one's ability to recite blessings and fulfill the necessary mitzvot of Purim.

Most opinions agree that one should drink more than one is accustomed. The Talmud actually suggests as well that the mental blurriness necessary can also be fulfilled by a drink-induced nap.

What does it mean "cannot tell the difference between ‘Blessed is Mordechai' and ‘Cursed is Haman?'"

On a simple level, this is just a description of a level of intoxication, a point at which one has trouble making clear distinctions between right and wrong, good and bad.

Not being able to tell the difference between ‘Blessed is Mordechai' and ‘Cursed is Haman' accentuates one of the major themes of Purim, which is role reversal.

On a more philosophical level, when ‘Blessed is Mordechai' and ‘Cursed is Haman' become indistinguishable, one has grasped a higher concept that even the negative which happens is good, that it comes from G-d and, in the end, makes us better people.

Why do we drink on Purim?

When reading the Purim story, one sees that wine plays an important role in events that transpire: 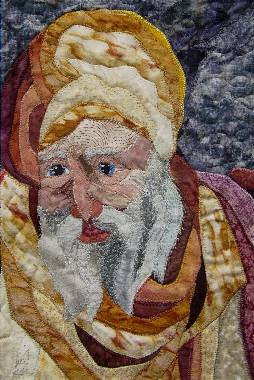 King Achashverosh is drunk when he calls for Vashti and when he orders her banished (*Targum and Rashi both say she was killed).
Esther invites the King and Haman to a banquet, which the Megillah refers to as a wine-banquet.
The Megillah describes the 14th and 15h of Adar as days of "feasting and joy," inferring that the Jews celebrated with feasts of wine.
IMPORTANT NOTICE

While drinking on Purim is a mitzvah, risking one's life is not. Whether host or guest, it is important to be responsible:

DO NOT DRINK AND DRIVE
Every year an alert goes out around Purim from the New York area Hatzoloh ( a Jewish E.M.S.) about underage drinking. Teenagers often believe that they can drink a lot without danger. However, the hospitals in large Jewish communities find an increase in emergency room admissions for alcohol related injuries/illnesses. And, unfortunately, the joy of Purim has been turned into tragedy by deaths that have occurred through such "fatal celebrations."
While Purim is a religious holiday, and underage alcohol consumption is allowed for religious occasions, adults are still responsible for minors. Please do not give young people liquor beyond the bare minimum, and remember, our children are influenced by our behavior!
Posted by DrMom at 8:25 AM