Giving Purim its due 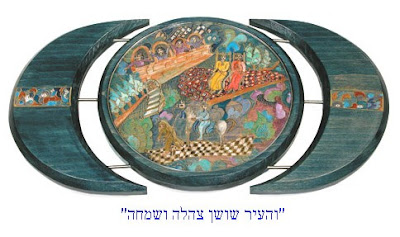 A perfect gift for Mishloach Manot! This Purim plate tells the Biblical story of Queen Esther. Mordechai sits on a white horse tugged by Hamman in a procession before the royals and the citizens. Hand-drawn and hand-painted in water color on Ash wood, varnished by a special laquer.

Purim doesn't get the same press that Hanukkah and Passover do, but it's twice the fun. How can you not love a holiday on which the Torah commands you to drink until you can't tell the difference between "cursed be Haman" and "blessed be Mordecai?"

The holiday, which begins March 20th is one of the most joyous on the Jewish calendar and commemorates a time when the Jews of Persia were saved from extinction.

It is customary to hold carnival-like celebrations and beauty contests, to perform plays and parodies, and to feast and drink during Purim, which is sometimes called Jewish Mardi Gras.

The best-known Purim food is the hamantaschen, a triangular cookie traditionally filled with prunes or poppy seeds. The name comes from the cookie's resemblance to the three-cornered hat worn by the villain Haman.

The story of Purim is told in the Book of Esther, a beautiful Jewish woman who is married to the Persian king. An orphan, Esther has been raised by her uncle Mordecai. Haman, an adviser to the king, hates Mordecai, who refuses to bow down to him.

Haman plots to execute all the Jews, but Esther reveals the plan to the king — and mentions for the first time that she is Jewish. As a result, Haman is hanged on the gallows he built for Mordecai.

The word "purim" means "lots" and refers to the lottery that Haman used to choose the date for the massacre.

This year for Purim, I wanted to try something different with my hamantaschen, even though I love the traditional prune and poppy seed cookies.

Recently, there has been wave of "nouveau" hamantaschen stuffed with apples, cranberries, chocolate and even mango. For my 21st-century hamantaschen, I created a recipe that uses a cream cheese-based dough, similar to rugelach, another Jewish pastry.

I filled my hamantaschen with fig and ginger preserves, which are sticky and moist enough so the filling does not spread, but also does not dry out. Hamantaschen are rather flat cookies, and using a preserve that is closer to a jam or jelly can prove disastrous, as they ooze and then burn.

Since I didn't use poppy seeds in my hamantaschen this year, I decided to make poppy seed candy. I tweaked tradition a bit and used golden syrup — a thick, inverted sugar syrup — instead of the typical honey, and added ginger for a bit of a kick.

Poppy seeds are used on Purim because Queen Esther supposedly subsisted for three days on them (and chickpeas) while she worked up the courage to tell her husband of Haman's plan to annihilate the Jews.

Other traditional Purim foods include kreplach, a triangular meat dumpling, and a special Purim challah, baked with raisins and whole eggs. Drinking wine is considered a good deed during Purim, but many other alcoholic drinks also are consumed, including schnapps, vodka and slivovitz, a very strong plum brandy.

In addition to drinking, people are obligated to give gifts to friends, family and the poor. Gift baskets holding at least two food items are popular ways to fulfill this commandment. Hamantaschen and poppy seed candy would be welcome in any basket.
Posted by DrMom at 10:39 AM