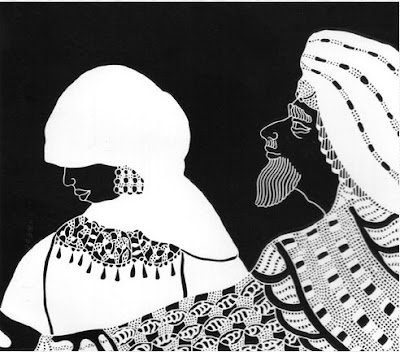 David Bennett was born Chicago in 1941 and later studied literature at Harvard University. In 1973, after 10 years as a professional opera singer, he moved to Germany to begin a career in painting. Of his work including this painting of Judah and Tamar, he says "I'm always struck by the fact that Genesis is a fascinating story which runs the entire gamut of human emotions - love, hate, sexual feelings, jealousy, etc. -" A cloaked Tamar is the subject of the stained glass by Diane-Blair Goodpasture

Parshat Vayeishev (Genesis 37:1-40:23) begins by describing Jacob's great love for his son Joseph which incites the other brothers' hatred. Their jealousy increases when Joseph tells them about his two dreams which indicate that they will one day be subservient to him. Jacob sends Joseph to check up on his brothers who are tending the flock away from home, and upon seeing him approaching they plot to kill him. Reuben convinces the brothers not to kill Joseph, but is unable to totally save him as the brothers sell Joseph into slavery in Egypt. After dipping Joseph's coat in blood, theyreturn to their father who assumes that his beloved son was torn apart by a savage beast. The Torah digresses to relate the story of Judah and his daughter-in-law Tamar.
.

The narrative then returns to Joseph in Egypt, where he becomes an extremely successful slave and is placed in charge of his master Potiphar's household. Potiphar's wife repeatedly tries to seduce Joseph, and when he refuses her advances, she screams and claims that he tried to rape her. Joseph is thrown into prison where he is once again placed in a position of leadership, this time being put in charge of the prisoners. Ten years later, Pharaoh's chief butler and baker are thrown into the same prison. One night they each have a perplexing dream which Joseph accurately interprets, and the portion concludes as the butler is returned to his former post and the baker is executed, just as Joseph had predicted.
Posted by DrMom at 11:28 AM