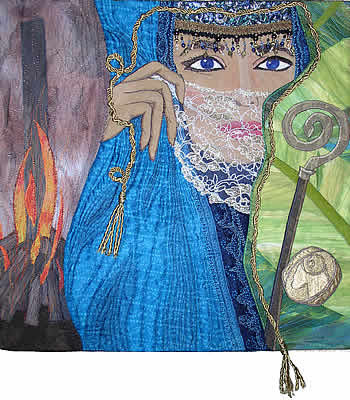 The name Tamar means ‘date palm’, a name that suggests strength, food, shade, and life. Fiber artist Judy Zoelzer Levine thinks of Tamar as being "righteous and strong." I think Judy is fabulous!


From the Website Eyshet Chayil: Immediately after Yosef was sold the Torah begins to tell us about the life of Yehuda. We learn that Yehuda left his brothers and went to live in another city. He made this break from his family to have time to meditate and think about his actions. In this city he meets a woman, Illith, the daughter of a Canaanite man named Shua. Together they had three sons: Er, Onan and Shelah.
In the year 2225, when Er was seven years old, Yehudah decided it was time for him to marry. He chooses as a wife, Tamar, who according to many Mefarshim was a descendant of Noach’s son Shem. Mizrachi says that she was the daughter of Shem’s first born son.

Tamar was very beautiful and Er did not want to mar her beauty in anyway. Thinking that pregnancy would make her ugly, he began practicing a form of birth control that is completely against Halacha. It was as a result of this sin, the spilling of his seed, that Er died at a young age.

Soon after Er died, Yehudah approached his second son, Onan, and asked him to marry Tamar and perform the rite of Yibbum with her. Yibbum is performed in situations when a man dies without having children. In these situations, an unmarried brother will marry the widow and according to Rashi a child from that union will be named after the dead brother. Yehuda told Onan that if he consents to marry her it must be strictly for that reason, simply to perform the mitzvah.

Onan agreed to marry Tamar. However, he committed the same sin as Er. The Chumash says he did it because he knew the child would not be his. Sifsei Chachomim explains that according to Rashi not only would the child be named after the deceased, but would also be considered as the child of the deceased. READ MORE HERE.
Posted by DrMom at 11:57 AM