A Midrash for Eve...


Batia Citrin Kenet was born in Israel. For many years, she worked as a special education teacher in high school in Israel. After moving to Canada, Batia realized that artistic creation can serve as an educational tool and began designing and creating clay dolls. However, she found this process too time consuming and cumbersome, and unsuitable for most children. She then proceeded to invent her own unique method of doll making, which then evolved into her dolls today, dolls that tell a story, and can portray biblical, historical, or personal events. Here are Batia's Adam and Eve. 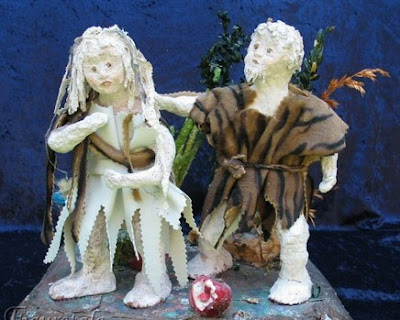 From Theater Juaica a Midrash about Eve

As we approach Simchat Torah and some of the most familiar stories
in the Bible, we are often tempted to do another quick read.
Perhaps for that reason, there are so many midrashim about the
Creation and the Garden. Midrash fills in the blanks, it gives us insights
into the stories. When we read carefully, each verse raises questions, and
midrash tries to answer them. For example, why did Eve do what she did?
Why did she take that fruit? There isn’t much in the text to go on, just:
“When the woman saw that the tree was good for eating and a delight to
the eyes, and the tree was desirable as a source of wisdom, she took of its
fruit and ate. (Bereshit 3:6).
For years, this one sentence has never reflected well on Eve, and classic midrash doesn’t help. There is a midrash in Genesis Raba that says the serpent chose Eve because it knew she’d be easy to lead astray, like all women. Genesis Raba also suggests that evil, or Satan, was created in the world right along with Eve. Another midrash suggests that Eve saw the Angel of Death when she touched the tree of knowledge of Good and Evil, and thinking that after she died, Adam would take another wife, she made him eat of the fruit, too.
The midrash is continued here.
Posted by DrMom at 12:03 PM