Serpent in the garden. 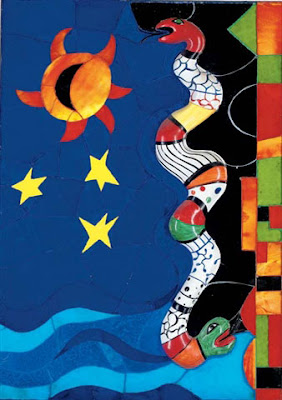 Within the first chapters of Bereishit the world is begotten, Adam and Eve are created, Adam and Eve are sent out of the Garden of Eden, Cain kills Abel... If the Creator were a screenwriter what a soap opera he wrote! But the chapters are replete with symbols such as the evil serpent... Here, the role of the serpent is explained.

The serpent, who was "craftier than all the beasts of the field" (Bereishit 3:1), tempted Eve with his smooth words, and caused her to eat from the fruits of the tree of knowledge, and to give thereof to Adam. It is no surprise therefore that he is used throughout the generations as a symbol of base and dangerous powers and even as the embodiment of Satan - man's greatest enemy. The Serpent-Satan beguiles, captivates and causes to sin. "Serpent" is also used as a term for an extremely wicked person (for example "Pharaoh the serpent" - Midrash Shemot Rabbah 20) and the enmity between it and man lead the sages to declare, "even the good serpent - crush his brain" (Masechet Sofrim 9:10).

Therefore it is very interesting to note that along with the negative and threatening image of the serpent, we also find that it symbolizes healing and even redemption. It is already mentioned as a vessel of healing in the Torah story of the "brass serpent" (Bamidbar 21): after the people of Israel slander G-d and Moses, they are attacked by "venomous snakes", which kill many people. When Moses prays to G-d, he is told to make a "brass serpent" and whoever looks at will be healed of the effects of the snakebites. The children of Israel worshipped this "brass snake" up to the times of King Hezekiah, who destroyed it as part of his war against idol worship (Kings II 18:4).

In many ancient cultures the serpent was a symbol of fertility. Sakes were kept in ancient Egyptian temples and barren women came to gaze upon them as a talisman of healing. Women spent the night in the temple of the Greek god of healing, Asclepius, in the hope that he would be revealed to them in the form of a serpent and would cause them to become pregnant. The famous Greek military leader, Alexander the Great, believed, that he was the son of a flesh and blood woman and of the Greek god Zeus, who appeared to her as a serpent. The serpent was a symbol of the god of healing and even today it is the symbol of the medical profession, and we find it, for example, also in signs on pharmacies and in the badge of the army medical corps.

Since the snake symbolizes both total evil and healing, absolute negative and the ability to escape from it, it is easy to understand how Shabtai Zvi, the false messiah, made use of it. Shabtai Zvi declared that the messiah had to come from the depths of impurity, as only one who knew total evil from within, could battle and defeat it. Therefore he chose the serpent as his symbol. He signed his letters with the likeness of a serpent and even made himself a serpent of silver, purposely reminiscent of Moses' "brass snake", thereby placing himself on the same level as the father of all prophets. In 1666 Shabtai Zvi converted to Islam, showing this by wearing a Moslem scarf around his head. His followers explained that this scarf was symbolic of the evil and impure serpent, which anointed his followers thus, thereby advancing the redemption of the world. Shabtaists even emphasized that that the numerical value of nachash (serpent) is the same as mashiach (messiah)! Two faces of this beast of the fields - the cruel and frightening and the healing and assisting - are thereby combined into one.


Niki de Saint Phalle was not a Jewish artist but frequently included biblical themes in her work, such as this serpent.
Posted by DrMom at 1:09 PM