The Flood, The Ark and The Rainbow 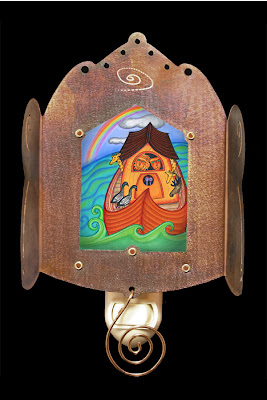 Bella Luz Designs with Light is a line of unusual lighting products and note cards designed by Joline El-Hai, a Seattle-based artist in Seattle, Washington. Her Luminettes, like this Noah's ark are wonderful ways to brighten any room.


After the waters of the flood caused the greatest ever devastation to the world, a covenant was made between Hashem and Noah for all time: Never again would there be another flood to destroy the entire world. This promise was accompanied by a sign -- the rainbow. As the Torah states in this week’s portion: "I have set My rainbow in the cloud, and it shall be a sign of the covenant between Me and the earth. And it shall happen, when I place a cloud over the earth. . .I will remember My covenant between Me and you. . .and the water shall never again become a flood" (Genesis 9:13-15). The above verse seems to indicate that the rainbow was an innovation, first appearing after the flood, some 1500 years after creation of the world. This story seems difficult to fathom. The rainbow is not some sort of heavenly, mystical phenomenon; it is a natural occurrence, scientifically explained, appearing when light shines through moisture and clouds. If so, where was the rainbow throughout the first 15 centuries after creation? In addition, what significance does a colorful display in the sky possess, making this the symbol of Divine tolerance?

An understanding of the rainbow and its symbolism will help us answer the query. On the one hand, the rainbow has a negative connotation. The rainbow is, after all, a reminder that although the world may be deserving of a flood, such a cataclysmic event will not occur. In other words, every time one sees a rainbow, he is reminded of what was wrought upon the world during the flood and that if not for the Divine promise, it would reoccur now. The Talmud actually tells of certain generations in which the rainbow did not appear due to their righteousness. Interestingly, although a special blessing is recited on seeing the rainbow, we are nonetheless cautioned not to gaze lingeringly at the rainbow, since it is not a pleasant reminder.

On the other hand, a rainbow symbolizes the ultimate in goodness. In the book of Ezekiel, the prophet describes his ascent to the heavenly spheres where he was privy to a glimpse of the inner workings of the Divine. At the conclusion of this description, the prophet states: "Like the appearance of a bow which would be in the clouds on a rainy day, so was the appearance of the brilliance all around; that was the appearance of the likeness of the glory of G-d" (Ezekiel 1:28). In other words: It is the rainbow that symbolizes the appearance of no less than Hashem. The above paradox concerning the rainbow leads us to examine the circumstances that brought about the flood and the subsequent rainbow in the first place. Until the flood, the atmosphere of the world -- indeed, even its physical atmosphere -- had degenerated into a place of contamination and impurity through the evil actions of Mankind. This contamination brought to the world a tangible coarseness, to the extent that it would have been insufficient simply to rid the world of the evil doers; the actual corporeal character of the world had to be cleansed and purified. A destruction in the magnitude of the flood was inevitable. 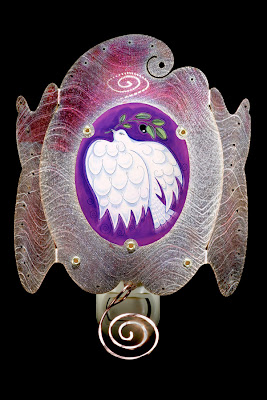 After the flood, the world was indeed purified. As the Midrash puts it, the rain which fell for forty days and nights was similar to the waters of a mikvah (ritual bath) -- which requires forty measurements of water -- serving to purify humankind. After undergoing a total removal of the palpable crassness in the world, the light of G-dliness now had a chance to impact the world. Clouds, formed presently of the newly purified waters of the world, would now be capable to allow G-dly light into the world.

At this point, Hashem declared that His presence would be projected into the world in the form of the rainbow. Each time there is a reason to think that the world should undergo a cleansing, a ray from the sun bursts through the clouds and paints a beautiful, shining picture, befitting a description of Divinity. The rainbow serves as a reminder that the world is a place into which G-dliness is projected, and it can therefore never be so corrupted. Eventually, this G-dly projection paved the way for the Torah being introduced into the physical world.

We can now understand the deeper meaning behind the law, mentioned above, of not gazing longingly at the rainbow. Since the rainbow symbolizes Hashem’s shining presence, it is necessary to employ respect and honor by not looking too much at it.

From the above we can derive an important lesson. In life we all encounter tests and challenges. At times these tribulations seem to present us with insurmountable obstacles. Thinking of the rainbow and the message it contains, we can be assured that however bleak things seem to be, light can, and will, penetrate the clouds. With every difficulty presented, Hashem’s shining presence is really there, ready to shine through and lead us to a beautiful light
Posted by DrMom at 12:48 PM