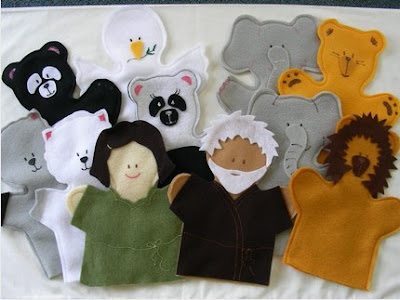 This puppet parade were featured on Etsy... they are made by a nonprofit organization which supports victims of domestic abuse. These puppets could teach a story and save a life!

Today, we are chatting with the oh so lovely Noah's Wife.

Tish:I noticed that your name isn't mentioned in the Bible. Can you tell us why?

Noah's Wife:Well, dear, we were a little busy with all of those animals to worry about something so insignificant like that. You women today are more concerned about that sort of recognition.

Tish: Okay..Could you tell us about your time on the Ark?

Noah's Wife: What is there to tell? My sons, wonderful boys, they had their wives on the Ark. Can I share something with your readers?

Noah's Wife: Well, it's one thing to SAY you'll help your in-laws with cleaning the cages, but DOING it is what counts. I'm not saying they were lazy but in my generation, we did what had to be done. If that meant scooping out the llama's area three times a day, we would do it. These young people today think that poop just cleans itself and it doesn't.

Tish: I take it you didn't get along with your sons' wives.

Noah's Wife: Ham's wife didn't care for cooking, which if she would have spent any time with me LISTENING, she could have learned how to do more than stand and look pretty. Shem's wife, what can I say? I told her don't play with the animals, and what does she do? No one in their right mind tries to pet a snake!

Noah's Wife: (turns her head and crosses her legs) I'd rather not discuss that woman. (leans forward and points) But if I had to say something which I don't usually talk about people, I would say that girl has issues with authority.

Tish: Let's move on. I am sure you have heard of PETA, the People for Ethical Treatment of Animals. Do you have an opinion on them?

Noah's Wife: (Giggles)Oh, you silly people. What are you thinking? I've spent more time with every animal on this earth and I can tell you one thing: the only treatment that they deserve is a good marinade.

Tish: How is your relationship with Noah?

Noah's Wife: That man could drive a wooden man crazy, but I love him. He likes to drink more than I care for, but what can I do? He's a man. You can't live with them, you can't push them overboard.

Noah's Wife: Dear, can I tell you something?

Noah's Wife: You really should spend less time with this writing thing and more time in the kitchen cooking--