The meaning of Teshuva...

The shofar from the Studio of Michael Gore at the Anfora Furnace of Murano, Italy are not Kosher given they are made from glass and not an animal horn. They are created for their beauty and symbolism. What a wonderful way to tell those who enter your home that you are proud to be a Jew. 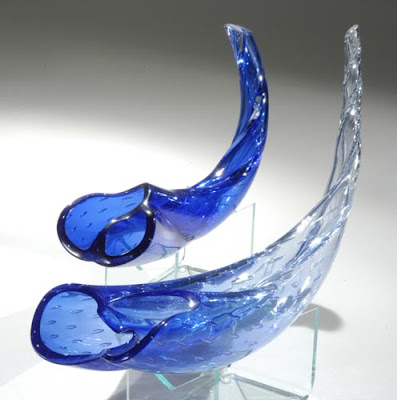 I discovered this blog Everyone Needs Therapy: The Shofar right as I was completing my posts for the next week (which means I am actually writing this blog on September 12th. Did you actually think I rose at dawn five days per week to write this thing?) I wish I had found it earlier. But none the less, I will share it with you.

In the bible it's all about big announcements, calls for war, and calls for repentance. Little stuff.

Jews designate an entire month to repentance, and I suppose it's something along the lines of Lent. All I can say on that is that no matter what the similarities, when it comes to most traditions, for better or worse, we've usually started them

The month of Elul (we're already in it a couple of weeks) is the Jewish month of consideration. 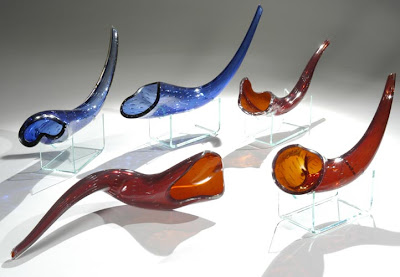 It is said that one of our holier rabbis would think about what he had done wrong the night before, before he ate breakfast.

Then before lunch, he considered what he'd done wrong between breakfast and lunch.

Then before he ate dinner, he went over what he had done between lunch and dinner. He didn't eat a morsel of food until he looked himself directly in the mirror and fixed his make-up.

These were the first few paragraphs of THE SHOFAR... hit the link above for the complete post.
Posted by DrMom at 9:26 AM