This shofar is from Eva Arbiv Mishan and has three bands of fabric which decorate the Shofar and on each band sequins, colored stones & appliqued embroidered designs in silver have been added to complete the design. A shofar this beautiful is reason alone to blow your horn! 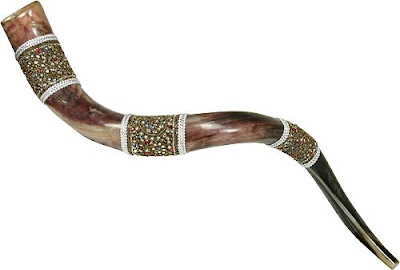 1. Rosh Hashanah is the day that commemorates the creation of the world and it is described as the "coronation" of Hashem (G-d). As it is customary to sound a trumpet at a king's coronation so we blow the shofer on Rosh Hashanah. By blowing the shofar we recognize the "purpose" of the creation.

2. The shofar blast marks the beginning of a period of amnesty which is known as The Ten Days of Repentance. Repentance is based on the fact that since humanity has been given free-will, and our actions are not pre-determined, we must take responsiblity for our actions. The ability to repent teaches us that our future is not bound by our past and that by changing our behaviour we have the ability to change our past.

3. When the Jews accepted the Torah at Mount Sinai, the sound of the shofar is described as "continuously increased and was very great" (Exodus 19:19). The shofar serves to remind us of the revelation at Mt. Sinai and therefore to renew our commitment to Hashem and to accept that Torah morality is absolute and G-d given - not relative, nor does it depend on human understanding.

4. The prophets called out to the Jewish People and aroused them to improve their ways. The shofar reminds us of the admonitions of the prophets and their calls to repentance. We should be aware of the fact that Hashem communicated with us, via the prophets, and displayed through them His desire to perfect us and not to punish us.

6. The ram's horn reminds us of the Binding of Isaac when Abraham demonstrated his absolute faith in Hashem by being prepared to sacrifice his son. Hashem demonstrated His absolute love for Abraham by having him sacrifice a ram in his place.

7. The sound of the shofar is supposed to inspire fear in the hearts of those who hear it. It allows one to dwell upon fear of punishment, to progress from there to fear of doing evil and then to fear of G-d. Finally one arrives at the feeling of awe of G-d.

8. The shofar reminds us of the day of judgment in the future. And inspires us to pray for the perfection of world, all of mankind and the Messianic era.

9. The sound inspires us to yearn for the ingathering of the Exiles, that will be heralded by the sound of a shofar. There will be absolute unity amongst the Jewish People and our connection to Land of Israel will again be absolute.

1O. The shofar recalls the resurrection of the dead which will be accompanied by the sound of a shofar. As G-d is the source of all life and the creator of all existence so He has complete control over death.
Posted by DrMom at 9:11 AM