Blowing for a Miracle 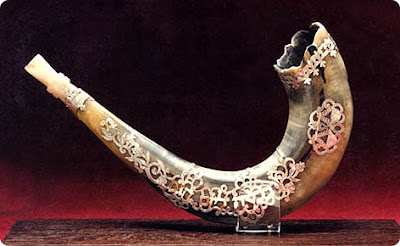 The Shofar from Shuki Freiman is to be sounded in the synagogue not simply displayed at home. This silver shofar is cut out and engraved with the Hebrew verse: "Sound the shofar at the new moon, at the full moon on our festival."
The drash below is from InnerNet:

What better reason, what further rationale do we need? The Torah clearly states (Numbers 29:1): "In the seventh month, on [day] one of the month, a day of [shofar] blowing shall it be unto you." Indeed, according to Rabbi Elimelech of Lizhensk, the primary intent upon which one should concentrate during the sounding of the shofar is to fulfill the will of the Creator.

That Israel needs no rationale other than "the Torah has told us to blow," is illustrated with a story told about the renowned chassidic Rabbi Levi Yitzchak of Berditchev:

One year Rabbi Levi Yitzchak spent a long time in search of a man who would be worthy of blowing the shofar in his synagogue. Rosh Hashanah was fast approaching, and though many righteous folk sought the privilege, vying with each other in demonstrating their expertise in the mystical kabbalistic secrets associated with the shofar, none of them were to his taste.

One day a new applicant came along, and Rabbi Levi Yitzchak asked him on what deep mysteries he meditated while he was performing the awesome mitzvah.

"Rabbi," said the newcomer, "I'm only a simple Jew. I don't understand too much about the hidden things of the Torah. But I have four daughters of marriageable age, and when I blow the shofar, this is what I have in mind: 'Master of the universe! Right now I am carrying out Your will. I'm doing Your mitzvah and blowing the shofar. Now supposing You, too, do what I want, and help me marry off my daugters.'"

"My friend," said Rabbi Levi Yitzchak, "you will blow the shofar in my synagogue!"
Posted by DrMom at 9:31 AM