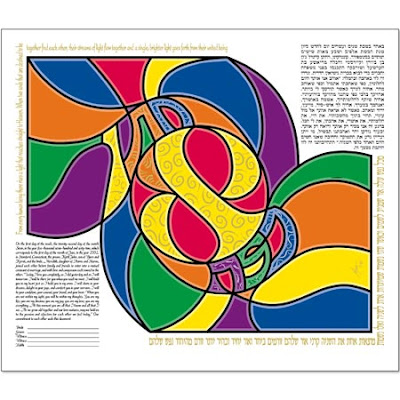 The ketubah is among history's first prenuptial agreements, protecting both parties and their families as they enter into this agreement. The Aramaic portions which appear in Orthodox wedding contracts contain legal information, including the grooms financial responsibilities to his wife.
On the ____ day of the week, the ____ day of the month ____ in the year ____ since the creation of the world, in the city of ____, ____ son of _____ said to this maiden ____ daughter of ____, "Be my wife according to the laws of Moses and Israel, and I will cherish, honor, support and maintain you in accordance with the custom of Jewish husbands who cherish, honor, support and maintain their wives faithfully. And I here present you with the settlement of two hundred silver zuzim, which belongs to you, according to the law of Moses and Israel, and I will also give you your food, clothing and necessities, and live with you as husband and wife according to the universal custom." And the maiden _____ consented and became his wife. The trousseau that she brought to him from her father's house, in silver, gold, valuables, clothing, furniture and bedclothes, all this _______, said bridegroom, accepted in the sum of one hundred silver zuzim, and _____, the bridegroom, agreed to increase this amount from his own property with the sum of one hundred silver zuzim, making in all two hundred silver zuzim. 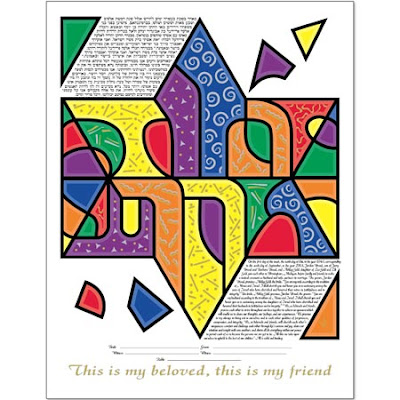 And thus said ____, the bridegroom: "The responsibility of this marriage contract, of this trousseau, and of this additional sum, I take upon myself and my heirs after me, so that they shall be paid from the best part of my property and possessions that I have beneath the whole heaven, that which I now possess or that which I may hereafter acquire. All my property, real and personal, even the shirt from my back, shall be mortgaged to secure the payment of this marriage contract, of this trousseau and the addition made to it, during my lifetime and after my death, from the present day and forever." _____, the bridegroom, has taken upon himself the responsibility of this marriage contract, of the trousseau and of the addition made to it, according to the restrictive usages of all marriage contracts and the adjoins to them made for the daughters of Israel, according to the institutions of our sages of blessed memory. It is not to be regarded as a mere forfeiture without consideration or as a mere formula of a document.

At the urging of friends,Micah Parker began to create ketubot and other Judaic art. We are so luck that this Sarasota, Florida resident shares his art with us... and many married couples.