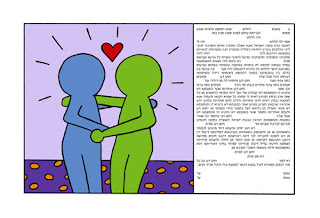 Choosing your ketubah is a big deal. My husband and I were blessed by my dearest friend Naomi whose aunt is a Ketubah artist. Ours is completely an original piece of art- right down to the typographical errors. We met in part because I wanted to meet "a Jewish man who read books." A book was central to our ketubah. Along the borders of the two pages were pictures of things that were personal to us- our dog Synapse, medical and psychiatric symbols, country music, even a NY apple and a GA peach! The Ketubah hangs proudly in our home. I hope you will enjoy looking at Ketubot over the next several days. 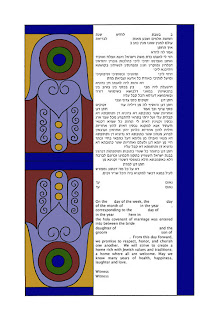 Samara Enchin has been creating artwork since she could hold a crayon. Her passion for painting and creating other works of art led Samara to pursue a B.F.A. at York University in Toronto. After graduation, Samara moved to New York City where she worked in two museums. While she enjoyed making the art world more accessible to others, she missed engaging in her own artistic endeavours. The creation of a Ketubah for her brother in 1998 led Samara back to a serious pursuit of painting. In 2001 Samara moved to Boulder, Colorado, where the beauty of her surroundings inspired a number of artistic creations. It was here that she realized a career as an artist was not out of her reach. Samara currently resides in Toronto with her husband Jacob. She is painting and happy. 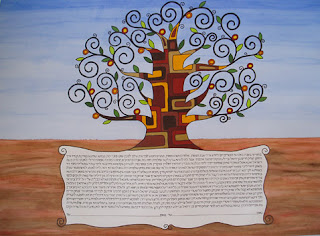