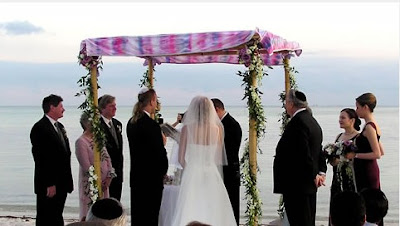 From www.jafi.org
The wedding canopy is a familiar component of the Jewish wedding ceremony. It can be placed inside a hall, on the platform (bimah) of a synagogue or out in the open air.

It is understood by many today as a symbolic representation of the house in which the married couple will be lived. But the origins of the idea of the Chuppah are complex and unclear:

The term is an old one that goes back to the Tanach, and there it means a room that belongs to a bridegroom, into which the bride enters as a mark of marriage. The coming of the bride into the special room that had been prepared by the groom for such an occasion was one of the signs that a marriage union had been legally recognised.
However, over time, the word "Chuppah" came to signify a number of different aspects of the wedding, such as the covering of the bride with the tallit of the groom.
Only in the sixteenth century in Eastern Europe do we seem to find the meaning of Chuppah in the modern sense – an open wedding canopy held up by four poles under which the marriage ceremony actually takes place. It is now an essential physical part of the marriage ceremony.
Over the generations, different ideas have developed about the meaning of the Chuppah:

As mentioned, it is understood to represent the home of the married couple.
The velvet canopy with which a Chuppah is traditionally covered is seen as representing the parochet (or curtain) that covers the ark of the Torah inside a synagogue.
The poles that hold up the canopy are said to represent the pillars of trust and faith on which the marriage must stand.
All of these are positive and significant meanings that the term Chuppah has acquired for itself during the years. However, as mentioned, the origin of the Chuppah is the groom’s special room into which the bride was brought as one of the signs that a bride had been acquired, and that a marriage had been concluded. The term “acquired” is to be used with care, because in the Jewish tradition, according to the Halachah, the groom must indeed acquire the bride, as already explained in relation to the Ketubah and later, in the motif of the ring.

The lovely photo is enhanced by a chuppah from Fabric Designs, the brainchild of Marjie McWilliams a fabric designer, textile artist and teacher who loves to combine her love of G'd and her love of art into Sanctuary Art.
Posted by DrMom at 1:41 PM

Thank you for mentioning me in your blog! I stumbled onto it while surfing the internet and appreciate the nice comments which many do not do when "using" this kind of information. All the best,