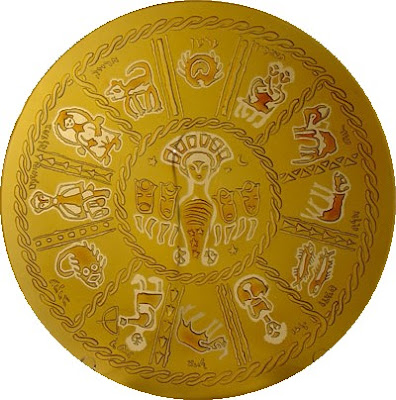 Numbers 1:1 - 4:20. From Australia is today's brief D'var Torah about the first readings from the book of Numbers.

In the Sinai Desert, G-d says to conduct a census of the twelve tribes of Israel. Moses counts 603,550 men of draftable age (20 to 60 years); the tribe of Levi, numbering 22,300 males age one month and older, is counted separately. The Levites are to serve in the Sanctuary, replacing the firstborn, whose number they approximated, who were disqualified when they participated in the worshipping of the Golden Calf. The 273 firstborn who lacked a Levite to replace them had to pay a five-shekel "ransom" to redeem themselves.

When the people broke camp, the three Levite clans dismantled and transported the Sanctuary, and reassembled it at the center of the next encampment. They then erected their own tents around it: the Kehatites, who carried the Sanctuary's vessels (the ark, menorah, etc.) in their specially designed coverings on their shoulders, camped to its south; the Gershonites, in charge of its tapestries and roof coverings, to its west; and the families of Merrari, who transported its wall panels and pillars, to its north. Before the Sanctuary's entranceway to its east were the tents of Moses, Aaron and Aaron's sons. More on the website

Tova Carmon is an Israeli Glass artist. I don't know much about her because her website is in Hebrew. But given that a picture is worth a thousand words you should look at the pictures on her webiste. They are more impressive than anything I could say about her work- including this 12 tribes plate.
Posted by DrMom at 1:53 PM

Glass and Bamidbar. How appropriate for me to see this this morning. I have felt my glass calling to me lately but have resisted because I am studying/practicing hard for my bat Mitzvah this Saturday. Thank you for the link to her site. He work is wonderful.