Kerry Feldman created this beautiful wine glass for the 100th anniversary of the Jewish museum. A fitting tribute to a wonderful institution and a wonderful woman.

Unlike Elijah's cup, Miriam's cup is filled with water. Miriam is a biblical heroine endowed with many qualities inspiring to young women today, a little girl with protective instinct, who unasked, watches over her baby brother floating in the reeds of the Nile to ensure his safety, and intelligent enough to trick an aristocratic Egyptian princess into returning baby Moses to his home and into the care of his real mother as nursemaid instead of killing the baby as per Pharaoh's orders. Miriam had faith when others did not, despite the adversity of Pharaoh's decree against the first born male children and her brother, Moses, and later against the fast approaching Egyptian army. In fact, so certain was Miriam's faith in her prophesy of victory that she even brought her musical instruments so she could celebrate that victory. In the Passover story, Miriam led the women in grateful song & dance, after the miraculous crossing of the Red Sea.

Many artists have taken to design and created Miriam's cups. Here are two more, one from Bonnie Cohen, and another from Tamara Baskin. 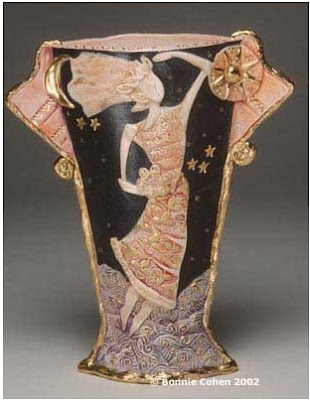 If you have not already, would this not be a wonderful time to begin a new ritual to your seder?
Posted by DrMom at 8:18 AM