Do you find yourself to be a bit ethnocentric? I know it only perpetuates stereotypes to think that Jews are smarter than others of other religions BUT when one looks at the list of nobel prize winners one cannot help but think that perhaps there is something there (slap me- I know this is a horridly racist thought). As a religion Jews are the most literate group because it is a mitzvah to study torah and talmud- which one cannot do if one cannot read.

That being said, today, the Nobel prize in chemistry was awarded. One of the three winners, Ada Yonath whose work is on ribosomes, is an Israeli woman- the eighth Israeli to win a Nobel Prize and the fourth woman to be awarded the chemistry prize. 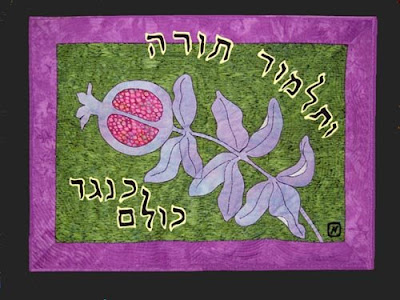 Today's art work is that of Deborah Michael Langsam and is entitled "Me'irah's Quilt: Study of Torah is Equal to Them All ." Deborah is the epitome of the Renaissance Woman and “circuitous” might be the word to describe Deborah’s path to art. The colors, shapes, and textures of fungal spores led her to a doctorate in botany from Duke University and a career as a biologist at the University of North Carolina at Charlotte. After twenty two years her attraction to the visual and tactile took a different turn … this time in the direction of textiles. Deborah creates contemporary wall-hangings and fiber art wearables. Her wall-hangings combine traditional quilting techniques and fabrics with an array of unique materials — photo transfers, beads, and found objects — to form original contemporary designs that play with color, texture, and light.
Posted by DrMom at 8:55 AM

Thanks so much for featuring my quiltart in the Judaica Journal.

The piece was made as a "thank you" gift to then student-Rabbi Me'ira Iliinsky for her wonderful work as a rabbinic intern with Havurat Tikvah (a Reconstructionist Congregation in Charlotte, NC).

Although the designs for most of my Judaica quiltart are original, I can't take credit for this design. It actually comes from a painting by Rabbi Iliinsky.

To see more of Rabbi Iliinsky's beautiful and moving art you can link to her website at:
http://www.versesilluminated.com/

Love that quiltart that you posted.

So glad to find your blog. Debbie Langsam's work is beautiful.
I think that we should be proud of our scientists

Toby
I am your Leeds Uk reader, and a devoted one at that. I would be grateful to receive an email address so that I can correspond with you about a matter of mutual interest - my web address is www.miriamteeman.com so you can see I am bona fide!
Regards

Dear Dr. Mom,
What a thrill it is to see my quilt, made by Deborah Langsam, posted on the internet! Deborah is an exiciting and inspiring artist, and it would be wonderful to feature more of her work. Today, this quilt hangs in my home office in Williamsburg, VA, where I am the Rabbi at Temple Beth El, and the original painting hangs outside the door of my synagogue office. Indeed, the study of Torah is the gateway into all of the mitzvot. and a source of tremendous satisfaction! Rabbi Me'irah Iliinsky

We can say that Brazilians play football especially well. Why not similarly commend Jews in other areas? No problem with being ethnocentric.