After yesterday's post about Jews in Japan and the associated postage stamp, I decided to use the art of postage stamps from Israel as my starting point for my next several posts. 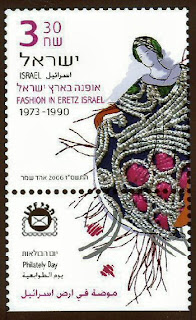 These stamps were released in 2006 and were designed by Ohad Shemer.
The who, what, when and where of clothing dates back to the very begining... At first, our birthday suits were considered appropriate attire... then Eve and Adam became embarassed and adorned their bodies with fig leaves... and that was just the start of our relationship to fashion...
Banished from the Garden of Eden for flouting the sole divine prohibition, and condemned (along with their future descendants) to a lifetime of toil and pain, the first man and woman receive one parting gift from their Creator: On their way out, Adam and Eve pick up a new set of clothing. Replacing their makeshift fig leaves, God opts for something in leather. "He made them coats of skin...and He clothed them."In our everyday lives (and in traditional Jewish practice), the distinction between clothing and skin seems crucial. It makes an enormous difference to us -- as we watch television, sit in synagogue, lie on the beach or walk down the street -- whether we are looking at epidermis or at garment, at a body or at something external to it. But from the very beginning, the Hebrew Bible blurs the boundary. Even the phrase "coats of skin" is ambiguous. Is God providing a new dermal layer, likened unto a coat, or (as we typically understand this passage) a disposable piece of outerwear made from the skin of another? READ MORE OF THE ARTICLE FROM JWEEKLY HERE