Peace in the house. This husband and wife team of jewelry creators make wonderful pendants from recycled scrabble tiles. 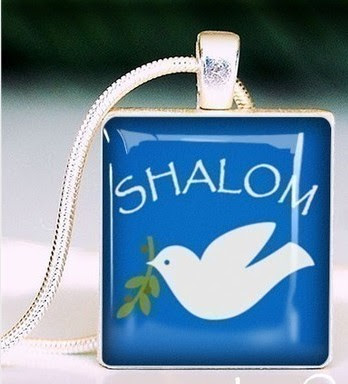 Shalom babayit, peace in the home is a goal that is not always obtained... read more about that here:

The myth of the kind gentle, Jewish husband has been broken down. The evidence that Jewish wife beating exists is strong. Statistics and headlines assail us with facts. 'One out of six' or 'one out of seven' Israeli women is regularly beaten at home. The estimated minimum figure is 100,000 battered women in Israel (of whom 40,000 end up hospitalized); the maximum number is 200,000 (which includes the Arab population). [1] (1) It is incontrovertible today, something which was not the case in the mid 70's, that Jewish awareness of the problem is on the rise--though not enough. The Jewish feminist, who may be alert to the existence of the problem in Israel, may not be aware that a similar problem exists on her own turf. Pick up the Denver newspaper, the Boston Jewish Advocate, The New York Times and you will hear about rabbis' wives who are beaten by their husbands, surgeons' wives who stay in abusive marriages for 12-16 years, Kosher shelters and kitchens for Jewish victims of domestic violence in New York City and Boston. The numbers being bandied about in the media vary from 19-25% The conspiracy of silence is breaking, but not fast enough. The article continues
Posted by DrMom at 7:22 AM