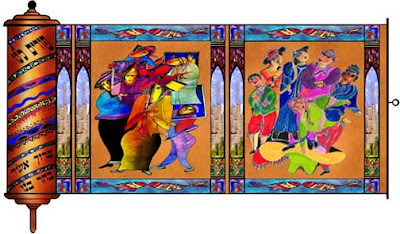 Time to plan the costumes, bake the hamantaschen and get out those groggers! It is almost Purim (MARCH 10 , 2009).

Artist Chaim Parchi is obviously in a festive mood.

Coming from a family of Hebrew scribes, Chaim began to use his innate talent of Hebrew calligraphy along with a primitive, naive art style that enveloped a heavy emphasis of Jewish subject matter. Along with his Judaic art, a secular art style developed in the modern and contemporary form. Chaim merges fantasy with reality to create a unique style. Chaim developed his own technique of painting using acrylic watercolors, pen and ink, an unusual method that simulates an airbrushing.
He has been strongly influenced by family artisans, a love for Israel, and the history of the Jewish people. His music and art is a reflection of his deep passion for Judaism. Chaim is a multitalented man with a God-given gift for music and art.