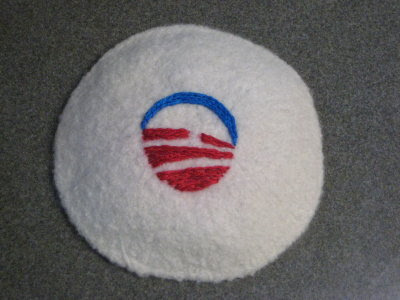 From the needles of TikkunKnits this one of a kind felted Obama yarmurlke. Below are some mass produced McCain and Obama kippot.
GEORGE WASHINGTON was the first President to write to a synagogue. In1790 he addressed separate letters to the Touro Synagogue in Newport, RI, to Mikveh Israel Congregation in Savannah, GA, and a joint letter to Congregation Beth Shalom, Richmond, VA, Mikveh Israel Philadelphia, Beth Elohim, Charleston, SC, and ShearithIsrael, New York. His letters are an eloquent expression and hope for religious harmony and endure as indelible statements of the most fundamental tenets of American democracy.
THOMAS JEFFERSON was the first President to appoint a Jew to a Federal post. In 1801 he named Reuben Etting of Baltimore as US Marshall for Maryland.
JAMES MADISON was the first President to appoint a Jew to a diplomatic post. He sent Mordecai M. Noah to Tunisfrom 1813 to 1816.
MARTIN VAN BUREN was the first President to order an American consul to intervene on behalf of Jews abroad. In 1840 he instructed the U.S. consul in Alexandria, Egypt to use his good offices to protect the Jews of Damascus who were under attack because of a false blood ritual accusation.
JOHN TYLER was the first President to nominate a U.S.consul to Palestine. Warder Cresson, a Quaker convert to Judaism who established a pioneer Zionist colony, received the appointment in 1844.
FRANKLIN PIERCE was the first and probably the only President whose name appears on the charter of a synagogue. Pierce signed the A ct of Congress in 1857 that amended the laws of the District of Columbia to enable the incorporation of the city's first synagogue, the WashingtonHebrew Congregation.
ABRAHAM LINCOLN was the first President to make it possible for rabbis to serve as military chaplains. He did this by signing the1862 Act of Congress which changed the law that had previously barred all but Christian clergymen from the captaincy. Lincoln was also the first, and happily the only President who was called upon to revoke an official act of anti-Semitism by the U.S. government. It was Lincoln who canceled General Ulysses S Grant's 'Order No. 11' expelling all Jews from Tennessee from the district controlled by his armies during the Civil War. Grant always denied personal responsibility for this act attributing it to his subordinate.
ULYSSES S. GRANT was the first President to attend a synagogue service while in office. When Adas IsraelCongregation in Washington D.C. was dedicated in 1874, Grant and all members of his Cabinet were present.
RUTHERFORD B. HAYES was the first President to designate a Jewish ambassador for the stated purpose of fighting anti-Semitism. In 1870, he named Benjamin Peixotto Consul-General to Romania. Hays also was the first President to assure a civil service employee her right to work for the Federal government and yet observe the Sabbath. He ordered the employment of a Jewish woman who had been denied a position in the Department of the Interior because of her refusal to work on Saturday.
THEODORE ROOSEVELT was the first President to appoint a Jew to a presidential cabinet. In 1906 he named Oscar S. Straus Secretary of Commerce and Labor. Theodore Roosevelt was also the first President to contribute his own funds to a Jewish cause. In 1919, when he received the Nobel Peace Prize for his efforts while President to settle the Russo-Japanese War, Roosevelt contributed part of his prize to the National Jewish Welfare Board.
WILLIAM HOWARD TAFT was the first President to attend a Seder while in office. In 1912, when he visited Providence, RI, he participated in the family Seder of Colonel Harry Cutler, first president of the National Jewish Welfare Boar d, in the Cutler home on Glenham Street.
WOODROW WILSON was the first President to nominate a Jew, Louis Dembitz Brandeis, to the United States Supreme Court. Standing firm against great pressure to withdraw the nomination, Wilson insisted that he knew no one better qualified by judicial temperament as well as legal and social understanding, confirmation was finally voted by the Senate on June 1, 1916. Wilson was also the first President to publicly endorse a national Jewish philanthropic campaign. In a letter to Jacob Schiff, onNovember 22, 1917, Wilson called for wide support of the United Jewish Relief Campaign which was raising funds for European War relief.
WARREN HARDING was the first President to sign a Joint Congressional Resolution endorsing the Balfour Declaration and the Palestine Mandate supporting the establishment in Palestine of a national Jewish home for the Jewish peopl e. The resolution was signed September 22, 1922.
CALVIN COOLIDGE was the first President to participate in the dedication of a Jewish community institution that was not a house of worship. On May 3, 1925, he helped dedicate the cornerstone of the Washington, D.C. Jewish Community center.
FRANKLIN D. ROOSEVELT was the first President to be given a Torah as a gift. He received a miniature Torah from YoungIsrael and another that had been rescued from a burning synagogue in Czechoslovakia. Both are now in theRoosevelt Memorial Library in Hyde Park. The Roosevelt administration's failure to expand the existing refuge quota system, ensured that large numbers of Jews would ultimately become some of the Holocaust's six million victims. Fifty-six years after Roosevelt's death, the arguments continue over Roosevelt's response to the Holocaust.
HARRY S. TRUMAN, on May 14, 1948, just eleven minutes after Israel's proclamation of independence, was the first head of a government to announce to the press that 'the United Sta tes recognizes the provisional government as the de facto authority of the new state of Israel.' Truman was also the first U.S President to receive a president of Israel at the White House, Chaim Weizman, in 1948 and an Ambassador from Israel, Eliahu Elat in 1948. With Israelstaggering under the burdens of mass immigra tion in 1951-1952, President Truman obtained fro m Congress close to $140 million in loans and grants.D 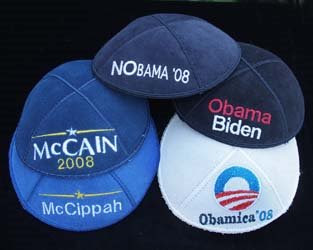 WIGHT D. EISENHOWER was the first President to participate in a coast-to-coast TV program sponsored by a Jewish organization. It was a network show in 1954 celebrating the 300th anniversary of the American Jewish community. On this occasion he said that it was one of the enduring satisfactions of his life that he was privileged to lead the forces of the free world which finally crushed the brutal regime in Germany, freeing the remnant o f Jews for a new life and hope in Israel.
JOHN F. KENNEDY named two Jews to his cabinet - Abraham Ribicoff as Secretary of Health, Education and Welfare, and Arthur Goldberg as Secretary of Labor. Kennedy was the only President for whom a national Jewish Award was named: The annual peace award of the Synagogue Council of America was re-named the John F. Kennedy Peace Award after his assassination in 1963.
JIMMY CARTER in a number of impassioned speeches, stated his concern for human r ights and stressed the right of Russian Jews to emigrate. He is credited with being the person responsible for the Camp David Accords.
GEORGE H.W. BUSH in 1985 as Vice President had played a personal role in 'Operation Joshua,' the airlift which brought 10,000 Jews out of Ethiopia directly to resettlement in Israel. Then, again in 1991, when Bush was Pr esiden t, America helped play a critical role in 'Operation Solomon', the escape of 14,000 more Ethiopian Jews. Most dramatically, Bush got the U.N. to revoke its 1975 'Zionism is Racism' resolutionConsider the last two officeholders.
BILL CLINTON appointed more Jews to his cabinet than all of the previous presidents combined and put Ruth Bader Ginsburg and Stephen Breyer, both 1st appointed to the federal bench by Jimmy Carter, on the Supreme Court
GEORGE W. BUSH is the first president since Herbert Hoover who has no Jews in his cabinet at all and has appointed no Jews to the Federal bench.

Thanks for sharing the presidential record, Toby. All my life I've heard the mantra, "Is it good for the Jews?". And all I know at the moment is that more of the same government, more Bush, more McBush, cannot possibly be "good for the Jews".
L'shana tova. To a good year, and the political change that can only be better for the Jews than the past eight.
Leslie

I really enjoyed reading this presidential first list! Thank you so much for posting it!
Alissa
www.alefbet.com

Notice that this document is credited to Prof. Cohn at Georgetown?

Well, I wrote to Prof. Cohn, and here's his reply:

I did NOT write it. I vouch for nothing in it. Moreover, like you, I know that there is false information in the forgery. Whatever else one says about George W. Bush, he has appointed at least two Jews to is cabinet: Attorney General Michael Mukasey, an Orthodox Jew, and Secretary Michael Chertoff, the son of a conservative rabbi.

I have met Secretary Chertoff. His wife, Merle, works at the Georgetown Law Center. So I know something about them.

Moreover, I know that Bush has appointed Jews as federal judges.

This forgery has been floating around for over a year.

Well over 100 persons have inquired of me as to its veracity. I have asked each of them to please send this message to all persons to whom he or she sent the forgery, as well as to the person who sent the forgery to him or her, and ask that person to do the same.

I know that Truth never catches up with the Lie, but I keep trying. And I hope you will help me in that attempt.

More than 2 years down the road I wonder if many people now see Obama and his religious beliefs in the same light. It's amazing what people will say simply to get themselves elected.