A perfect wedding gift for a Republican Wedding? 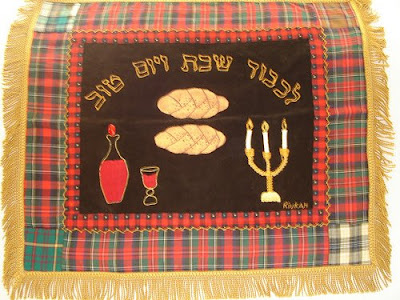 Rivkah Siegel: I am a chassidic Jew living in Brooklyn, New York. I returned to my roots many years ago after investigating eastern religions, gurus etc. I am drawn to Jewish subject matter but like to experiment with different media and give it a lighthearted twist. To be honest most of the "Jewish art" that I see out there is pretty bad.....poorly designed and cookie cutter.....I'd like to try to change that equation. My background is in textile design.

Rivkah's Challah cover, she says, is inspired by Ralph Lauren. Wouldn't it be a wonderful present if these two were to get together?

Guess who's coming to dinner: David Lauren and Lauren Bush. Lauren Bush, niece of George, has been dating David Lauren, son of Ralph, for three years. On the surface, that’s a match made in madras-print heaven. But according to the New York Daily News, Jenna Bush invited her cousin to her upcoming wedding without a date. Why was David Lauren excluded? It could be because the family’s upset that the couple has been together for three years without getting engaged, says one source. Or it could be because, as Radar helpfully explains:
David's actual surname is Lipshitz; his father famously changed it to Lauren when he realized that "Ralph Lipshitz" didn't quite fit the profile of a company whose logo features an aristocrat playing an aristocratic game on a horse.
The wedding is on the small side—only 200 people—and some of George H.W. Bush’s siblings aren’t invited. But this quote, from another anonymous source, doesn't paint the Bushes in the most tolerant light:
"There are religious differences," one points out. "Would he expect her to convert to Judaism?"
I recommend you look at Rivkah's flickr site and see her other wonderful Judaic pieces.
Posted by DrMom at 6:31 AM

I love your blog. It's great the way you find truly beautiful judaica to feature. I have to agree with Rivka, most judaica out there is kitch. It is changing, though.

We love Rivka! She's sooo capable of many different media, check out
her collages, her crayon resist drawings, her mosaics,her dolls.
A craftswoman par excellence!
Thank you for featuring her!