CARDly something to joke about! 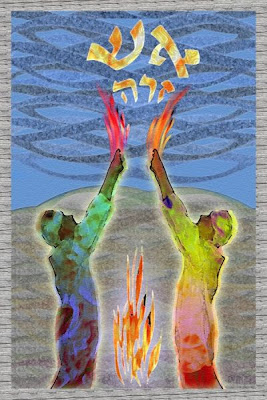 Can it be the time of year that we must consider purchasing Rosh Hashannah Cards? I love buying said cards, I just hate filling them out, addressing them, mailing them. You know- the thing that makes it worthwhile. I thought I would show you this week some cards that are available...


Michael Yosef Robinson's love for Judaism began when he was a 13-year-old girl growing up in Watsonville, CA. He consumed every book on Judaism he could find for the next 10 years, until he began attending Temple Beth El in Aptos, CA. He converted one year later, on May 10, 2001. (17 Iyar 5761, netzach she'b' hod in the counting of the Omer.) His mikvah was the Monterey Bay.

Soon after, on Yom Kippur of that year, he made the decision to begin transitioning from female to male, and subsequently came out as a gay man. In the interest of providing resources to other transgendered and transsexual Jews he started TransJews.org.

He was introduced to Jewish Renewal through his teacher Rabbi Eli Cohen, and became very involved with Chadeish Yameinu, the Jewish Renewal community of Santa Cruz, CA. As well as frequently leyning Torah and being a constant--if quiet--presence at CY gatherings and classes, he designed a logo for CY's t-shirts and designed (and formerly maintained) the Chadeish Yameinu website.

He has been writing poetry and prose since early childhood, and has been exploring and developing an affinity for visual artistry, particularly digital art, over the last five years. He maintains two websites of his visual artwork: Yosef's Dreams, a virtual Jewish art gallery, and Queer Spirit Art, which features a complete gallery and portfolio of his work. He also maintains a site of written work, including Jewish poetry and Torah drash, at Eish Zarah.

As an autistic person, he is active in the autistic rights and neurodiversity movement, advocating for greater respect for autistic people as autistics. Autist Art, his current project, promotes autistic pride and visibility
Posted by DrMom at 10:55 AM