I did not make this up 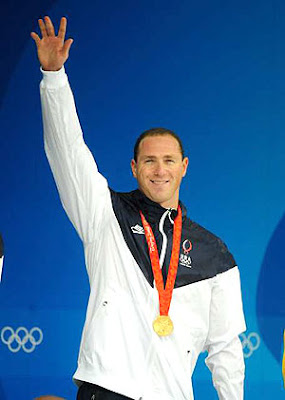 Two Jews and a black man help Phelps fulfill Olympic dream
By Uzi Dann, Haaretz Correspondant
Tags: swimming, Jason Lezak
BEIJING - Thousands of spectators and journalists stood on their feet for minutes and applauded in every language one of the greatest moments in the history of swimming, as they held their heads in disbelief. Some commentators even went as far as saying it was the greatest sporting event of all time. Former Israeli swimmer Yoav Bruk said it was the biggest single sporting event of all time, and he wasn't exaggerating by much. Certainly, it was an instant classic that will be remembered a long time from now. Many of the journalists said it was the biggest Olympic moment since runner Michael Johnson's record at Atlanta, no less. The few Israeli journalists at the Olympics were allocated tickets to be in the pool auditorium to witness the 4X100 freestyle relay final, which always draws great crowds, thanks to Nimrod Shapira Bar-Or and Guy Barnea's good results. Michael Phelps knew that this medal, his second out of the eight he has his sights on, is problematic. Phelps, who is not considered the best 100m swimmer, jumped in first. He seemed a bit fatigued from the 200m semis he participated in a few hours before. Still, even on a bad day he was only a millisecond away from the world record, and when teammate Garrett Weber-Gale - who is Jewish, by the way - jumped in he trailed his Australian opponent by a hair's width.
Advertisement
Despite the Aussies' great opening to the relay, the encounter was supposed to be fought between France and the U.S., and so it was. Alain Bernard of France, 25, was given an edge of six-tenths of a second by his teammate in the final leg of the relay. Up against him was the U.S. veteran Jason Lezak, age 33. It seemed like the French would claim victory, and that Phelps' mission to win the most medals of any swimmer in one Olympics was over. But then Lezak appeared. An amateur until the age of 20 who had played water polo and baseball, Lezak - a good Jewish boy from California - put on a great show. He disappointed at the Athens Olympics and was considered the person who ruined Phelps drive to break Mark Spitz's record in winning medals at the relay. They called him a loser behind his back, and said he was too old. But Lezak did it his way. In an incredible show of will power and determination, he closed in on his French rival. Perhaps he was driven by the will to humble the arrogant Bernard, who said "we will crush them" before the heat began. Maybe it was the great pool or swimming suits. Whatever it was, he slowly closed the gap and then with the tips of his fingers touched the pool's rim before Bernard. Phelps was the first to understand what had occurred and went wild. "He did something unbelievable," he later said about his teammate. The time they set, 3:08.24, was eight-tenths of a second ahead of the French, and four whole seconds ahead of the world record set on Sunday. Just how historic was this heat? The top five teams beat the world record that was only a day old. In addition, one unofficial world record was set when Lezak set a time of 46.06 seconds in the last 100 meters, but because it was during a relay event it is not considered an individual world record. "It was unbelievable," Lezak said. "I wanted it more than anyone else because of Athens. The French talked a lot before the heat, but we showed our worth in the pool." So in the end it was two Jews, an African American (Cullen Jones) and Michael Phelps who together managed to rein in the French and set a new astonishing world record. A triumphant Lezak yesterday added jokingly: "Maybe we can set a new world record at the next Maccabiah Games."
Posted by DrMom at 12:51 PM