ADDENDUM (AUGUST 16, 2008) Isaac was kind enough to add his active website to the comments section of the blog (it would have been nice to hear a bit more about him... but like every Jewish mom I never am satisfied). You can find Isaac here.

Isaac Brynjegard-Bialik is an artist living in Southern California. Isaac is a trained designer who began his fine art career while living in Israel. Isaac also has a line of Jewish Clothing. Here is an article about this Jack, I mean Jacob of All Trades! 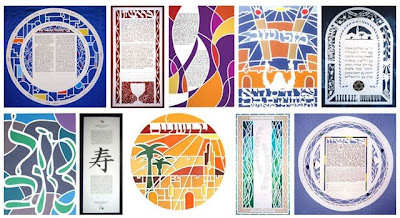 Its more than just jokes about matzah," says the creator of YidGear.com, a new web site featuring contemporary Jewish clothing. Its about Jewish identity." Thats not necessarily the first thought that comes to mind when you see a shirt asking, Is that a yad in your pocket or are you just happy to be reading Torah?", but creator Isaac Brynjegard-Bialik is sincere in his belief that his shirts can have a positive effect on the American Jewish community.
I want to give something back to my community," Brynjegard-Bialik says. I am proud of being Jewish, and I want my fellow Jews to feel the same way." His involvement with the Los Angeles Reform Jewish community started in religious school and Jewish camps, and he met his wife through the Los Angeles Bureau of Jewish Education. At UCLA he was an active member of the Jewish Student Union and started designing HaAm, the colleges Jewish newsmagazine; thats where he realized that he could use his talent and his involvement in the community to build Jewish pride. 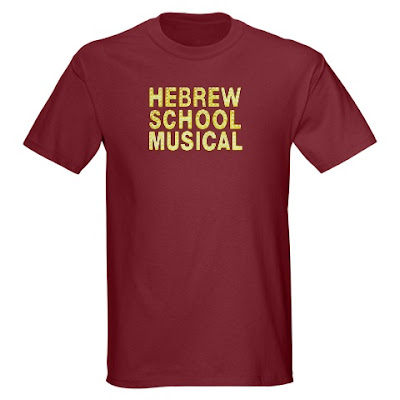 T-shirts are just a side venture for Brynjegard-Bialik, who is also an accomplished ketubah artist. Being involved in a simcha like a wedding, and helping people to celebrate such a happy time in their lives – thats really when I feel Im doing something important," he says. A traditional graphic designer as well, he recently designed the visual identity for the Los Angeles Jewish Festival, and is working on various side projects with the Los Angeles Jewish Federation and other Jewish organizations.
Part of the site is inspired by Brynjegard-Bialiks year in Israel. He and his wife lived in Jerusalem during her first year in rabbinic school, and he spent a lot of time talking with the other soon-to-be rabbis and their families. From those conversations sprung the Professional Jews" section of YidGear. The inside joke for Reform rabbis is that they have been through Reform School – hence the Reform School Graduate" design, which evokes memories of the HUC campus in Jerusalem. Other popular items in the section include clothes for rabbis kids, rabbis moms, and the rest of the rabbinic family. And, of course, something for rabbis husbands as well. 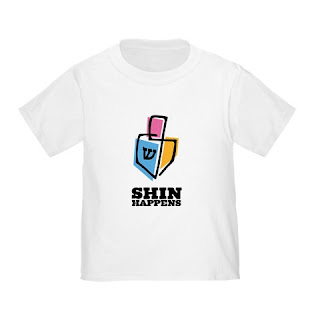 The wife of a rabbi is called a rebbetzin," he relates. So what do you call the husband of a rabbi?" He pauses for emphasis. Lucky!" Actually, the husbands have come up with the term rebbetz," and Brynjegard-Bialik has made sure to include a rebbetz" shirt on the site.
YidGears main section is the biggest, featuring designs referred to as Kosher, but sometimes tasteless" (among the many designs are a shirt that reads My ancestors went to Egypt and all I got was this lousy matzah", a BBQ apron sporting the motto Its fleisheg time!", and boxers that ask Want to shake the lulav?"). In addition to the section for professional Jews, theres also a section of clothes with Hebrew words and phrases, and a section just for campers.

*MOT is Member of the Tribe
Posted by DrMom at 6:12 AM

man, I wanted to get to his clothing shop but I can't :(

fun stuff though....and we will be looking for a Ketubah soon :)