This whimsical Chanukiah can be found at AllThingsJewish.com 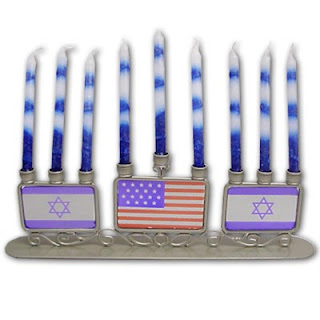 One of the most wonderful things about being an American is First Amendment of the United States' Constitution. I recently discovered a new website: Jews on First . I will be posting articles from there that I find important or intriguing. You may find it worthwhile of your time as well...
When I was in elementary school back in the 1940s during World War II, we used to recite the Pledge of Allegiance every day. We faced the classroom flag and said: "I pledge allegiance to the flag of the United States of America and to the republic for which it stands, one nation, indivisible, with liberty and justice for all." Later, when I was in college, it changed. An act of Congress in 1954 mandated that the words "under God" be inserted after "one nation." Whenever the occasion arises to recite the pledge, I still, instinctively, start to say the old pledge, the way I learned it as a youngster, and it is usually the surrounding voices that remind me it is different now.
The Pledge of Allegiance, of course, is not the only part of our public record to have evolved with respect to the place of God and religion in American life and law, and arguments over such issues are truly as old as the republic.
I mention my recollection of this change, however, because it always crosses my mind, involuntarily, whenever I hear arguments over the separation of church and state. So it came to mind as I looked over e-mail from viewers this week who were critical of a one-hour documentary film titled "Wall of Separation" that began airing last week on some PBS stations and that, according to a PBS Pressroom news release, "probes the origins and history of separation of church and state in America." Continue to the PBS website for the conclusion of this article.
Posted by DrMom at 7:36 AM

I love the art on this blog.