A good way to spend the Depression 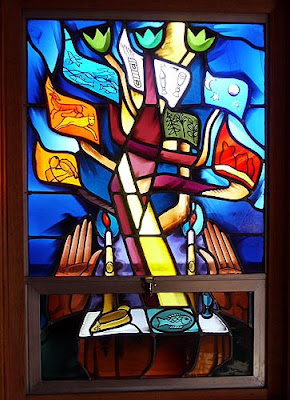 This and eleven other windows at Temple Beth Sholom were designed by artist A. Raymond Katz (1895-1974) of New York. Katz worked in various media, including murals, stained glass, mosaics, bas-reliefs, printmaking, paintings and drawings. Born in Kassa, Hungary, he came to the United States in 1909 and spent his early years in Chicago, where he studied at the Art Institute of Chicago and the Chicago Academy of Fine Arts. Among his murals are those for the 1933 Century of Progress exposition in Chicago, a post office in Madison, Illinois, the Young Women's Hebrew Association of Elizabeth, New Jersey, and many synagogues in the United States. His bas-reliefs and stained glass designs also can be found in numerous synagogues. Katz was well known for his designs based on characters of the Hebrew alphabet and for his interpretations of Jewish themes. After seeing his Ten Commandment paintings, Temple members Willard and Lois Cohodas visited Katz in New York and he offered to design, without charge, ten windows to symbolize the Ten Commandments for the Temple. Those windows were installed in 1962. This Sabbath Window was designed a few years later, not long before his death in 1974. All of the windows designed by Katz for Temple Beth Sholom were fabricated by Rohlf's Stained and Leaded Glass Studio of New York.
Posted by DrMom at 5:23 AM

Thank you for sharing this beautiful art and the information about the artist.

that is beautiful! what a great find Toby!

Kathi, I knew you would be all over this one...
And Marcia... my pleasure to bring you this!