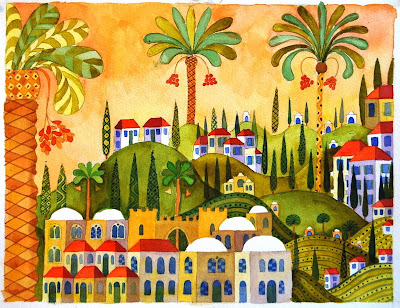 
I recently attended a Yiddish culture conference where participants were required to wear nametags printed with their full names. Thus displayed, my conspicuously Puerto Rican name provoked endless fascination and scrutiny. One day I was asked to identify my ethnicity five times -- before the end of breakfast.

For those who are not regularly asked by strangers to explain "How are you possible?", here's a sample of questions I fielded over the course of a day by well-meaning, completely unself-conscious folks -- during class, in the restroom, in the hallway, in the buffet line, on the dance floor...

1. "You must have a lot of drummers in your family," said the woman sitting next to me in drum class. (This happens to be true -- though what would she say to Yehuda Menuhin?)
2. "What a crazy coincidence! I was just humming ‘Feliz Navidad!'" said a woman I walked past by in the restroom. (Impressive that she could get the ringing of clarinets out of her ears.)
3. "Viva la Boricua!" a woman shouted enthusiastically. (I replied with a polite, "Yo, a sheynem dank.")
4. "I don't understand why you're studying Yiddish instead of Ladino." (My biggest FAQ, and a twist on the also-loaded question "why are you studying Yiddish?" most students of this language receive.)
5. "My, the intermarriage rate has really gone up in the last 25 years," one woman pointedly commented. (My parents are Jewish.)
6. "Wait a minute. That's possible? You're gonna have to explain," demanded a boisterous girl -- who then quickly professed her great love of salsa.


I am repeating these comments to suggest their cumulative effect. Fresh in my memory are the times a teacher took me out of class to ask if I am "really Hispanic"... or the time an astonished woman blurted out, upon hearing my full name, "But -- you're so smart!"... or the woman at an Orthodox shul who grouped me with the ‘shabbos goy' cleaning up after the kiddush. All of these are variations on the question no one dares to ask outright: How are you really Jewish? So here is a question I would like to ask White-identified Jews: Why is it that in so many Jewish surroundings --(even) in leftist, queer-positive ones -- Jews of multiethnic or non-Ashkenazi heritage remain objects of such unabashed fascination?

The way to free individuals from endlessly "explaining" (read: justifying) themselves is by making multicultural education a serious, central, and communal responsibility. Although resources and scholarship have increased in recent years, the American Jewish mainstream still primarily encounters their "proximate others" in the context of upbeat, de-politicized celebrations of Jewish diversity. This does nothing to decentralize European Jewish identity or cultivate the voices of non-Ashkenazim. So while I'm up for a good heart-to-heart about New Diasporist theory as much the next goles yid, the underlying activist message is simple: nobody should be made to feel less of a Jew because of her ethnicity. I hope that American Jews will no longer discuss klal yisrael -- the idea that Jews are a unified community transcending national and ethnic boundaries -- without acknowledging how racial difference actually plays out within Jewish communities.

Perhaps someday I will muster a gracious response when strangers stare at my face from multiple angles, trying to discern my race. For the time being, I wrestle with the remarkably generous words of Rabbi Capers C. Funnye, a prominent African American rabbi from Chicago: "I believe that people cannot know you unless you make yourself known. The only way to do that is to step outside and not fear rejection... I'm going to reach out until you reach back."

From Anna at Jewesses with an Attitude. Anna is a writer and muralist who grew up in the Amalgamated Cooperatives, aka "the workers' paradise of the Bronx." She wrote her thesis on tkhines, or Yiddish women's prayers, and recommends the poetry of Anna Margolin and Tsilya Dropkin.
Posted by DrMom at 8:28 AM

If I find something else I'll inform you.