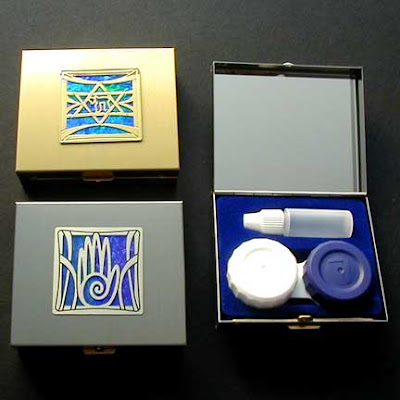 I found something all of us middle aged, near sighted hypochondraics need... contact lens cases and pill boxes with Judaic motifs. I found thsese at Kyle Designs. They may make a nice little present for someone going off to college as well...

By Rabbi Louis Jacobs
Jewish teaching advocates strongly that proper care be taken for the health of mind and body, since life is God's precious gift. The Talmud forbids a scholar to reside in a town in which there is no physician to care for the health of its citizens, and the Talmud contains much advice on how a person is to keep in good health.

[The outstanding 12th-century Spanish/North African sage Moses] Maimonides, himself a physician, devotes a section of his great code [of Jewish Law, Mishneh Torah,] to the subject in which he adds to the talmudic prescriptions hygienic measures deriving from his own experience and the medical knowledge of his day. Maimonides prefaces this section of his Code with the observation: "Since it is God's will that a [person]'s body be kept healthy and strong, because it is impossible for a [person] to have any knowledge of his Creator when ill, it is, therefore, his duty to shun anything which may waste his body, and to strive to acquire habits that will help him to preserve his health."

Jews have usually been careful (at times, it must be said, this borders on hypochondria) to preserve mental and physical health. The following are typical regulations found in the Talmud and [medieval Jewish law] codes which, whatever the original reason, have had beneficial hygienic effects.

The body must be bathed regularly and the bodily functions attended to as soon as they become necessary. To withhold evacuation of the bowels and passing water is considered sinful. Washing the hands before meals is a ritualistic prescription but the hands are also to be washed after visiting the privy and after touching parts of the body that are usually covered.

Over and above the dietary laws, some of which themselves have occasionally been understood on hygienic grounds, there are rules which prohibit the eating of food that may cause ill health. 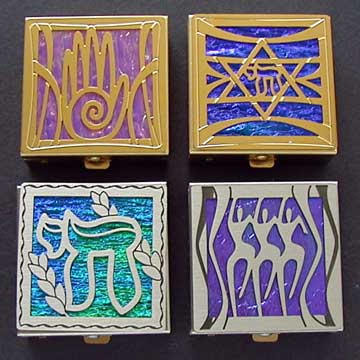 Nowadays, as a result of researches into the harm that is caused by smoking cigarettes, many rabbis frown upon smoking. Alcohol is nowhere proscribed as such but caution must be exercised not only to avoid drunkenness but also to ensure that imbibing alcoholic beverages should not cause mental or physical ill health. Taking drugs, unless prescribed by the doctor, is certainly frowned upon for this and for other sound reasons. Regular exercise is advocated for the purpose of keeping the body strong and healthy.

Naturally, it is generally acknowledged, some of the regulations found in this context in the ancient sources are not necessarily sound and may be positively harmful in the light of medical advances. But the principle of health-preservation still holds good, although it is the voice of the contemporary physician that should be heeded rather than any appeal to ancient sources.