Thank YOU for making me a woman... 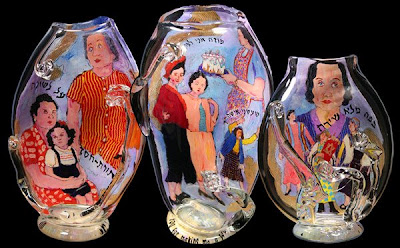 Lucy Rose Fischer participated in a wonderful conference called Practicing Jews: Art, Identity and Culture sponsored by the University of Wisconsin. Of her piece which is the inspiration for today's post she says, Orthodox men say a blessing that praises G-d “for not making me a woman.” I have transposed this traditional blessing—by thanking G-d for making me a woman. My three vessels are a celebration of life. I have interwoven contemporary images of women dancing with the Torah and scenes of my mother at different stages of her life.


By the way, I am glad I am a woman... but equally glad I don't have to deal with this problem:
One of the little controversies getting a lot of press in Israel lately is segregated bus lines. No, they don’t make the Ethiopians sit separately. Increasingly, Egged bus lines which serve a number of predominately Haredi neighborhoods are allowing the passengers to separate the sexes by having men sit in the front and women sit in the back. These buses are designated “kosher”, but religious authorities declined to answer how exactly they are cooked.

While there is no Halacha to the best of my knowledge that says women can’t sit next to, opposite, or in front of men on a bus, Egged, Israel’s public bus line has nonetheless acquiesced to the vocal (and male) members of the communities.

You may have heard about the now infamous case of Miriam Shear, a 50 year old religious American immigrant to Israel, who was brutally beaten on November 24 for refusing to move to the back of the bus, on a line that was not even officially designated as “mehadrin.” Read the account in her own words here.

Other women have reported being threatened, harassed and intimidated for exercising their right to sit where they want. They are public buses, after all.

Well, say the women, enough is enough. According to YNet, a group of women, “among them haredi author Naomi Ragen, will file a petition with Israel’s High Court, claiming that such segregation is illegal and humiliating. “We’re sick of sitting in the back of haredi buses. We prefer to sit up front,” they wrote.”

While I respect the Haredi population’s right to live by the motto of the Offspring song “you’ve gotta keep em separated” the execution of these bus lines was poorly, poorly done. Public buses should not be used. You want “kosher” bus lines, start your own private company which caters to your population. Additionally, the buses were poorly identified, (women report not always knowing if they were getting on to a segregated bus or not) and enforcement of this so called rule was at the hands fellow bus passengers.

I’m really hoping the petition effects real change, and hoping, perhaps in vain, that all the negative publicity Haredim have been under will wake a few rabbis and leaders up to the need for emphasizing proper behavior towards women (from Jewlicious).
Posted by DrMom at 8:59 AM