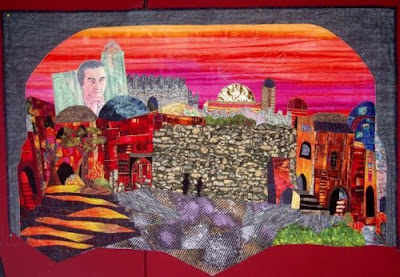 Phyllis Cullen is a prolific quilter whose designs are influenced by her extensive travels as a volunteer medical doctor to developing countries.Her quilts are landscapes, people, architecture, animals, full of color, and transformed by her life at home. Thank you to Cathy Perlmutter, a quilter extraordinaire in her own right, for sharing this with me.

I can honestly say that I was never affected by the question of the success of an undertaking. If I felt it was the right thing to do, I was for it regardless of the possible outcome.

We have always said that in our war with the Arabs we had a secret weapon—no alternative. 1969

The Egyptians could run to Egypt, the Syrians into Syria. The only place we could run was into the sea, and before we did that we might as well fight. 1969

It’s no accident many accuse me of conducting public affairs with my heart instead of my head. Well, what if I do? … Those who don’t know how to weep with their whole heart don’t know how to laugh either. 1973

Let me tell you something that we Israelis have against Moses. He took us 40 years through the desert in order to bring us to the one spot in the Middle East that has no oil! 1973

To be or not to be is not a question of compromise. Either you be or you don't be. 1974