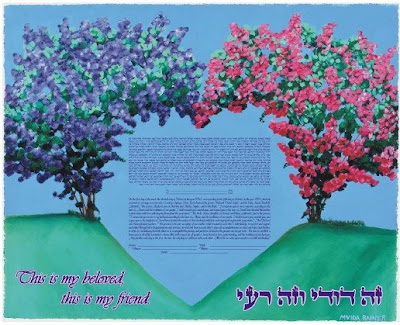 In light of the recent legislative/judicial movement towards the legalization of same sex couples in the state of California, I decided to feature the ketubot of some artists who have supported same sex unions in the past... perhaps you or some friends will consider using their art work to further enhance your ceremony? The abstract trees are from Michelle Dwyer and the crepe myrtle heart is from Michele Rainer. The single autumn tree was created by Eve Rosin. All three ketubot can be found on MP ARTWORKS.

When Rabbi Jerome Davidson of Temple Beth El in Great Neck, New York called his colleague Rabbi Karen Bender and her life partner Rachel Bernstein to the bimah during Shabbat services last summer for an unannounced aufruf-a pre-marital blessing-he had no idea just how hot that summer would get.
Most of the congregation was just fine. But some were a little shocked. Some were dismayed. And some were very angry. Seven members withdrew their membership. At least seven joined in support.

"Some people began losing sight of Karen and her many remarkable talents," Rabbi Davidson says.

"I have not officiated at intermarriages because I believe every marriage I perform should be the beginning of a Jewish home where Judaism is lived, learned, shared, and celebrated," Rabbi Davidson replied. "The question of Jewish lesbians and gays who come to a rabbi to sanction their union simply cannot be misconstrued as the same as that of an interfaith couple." 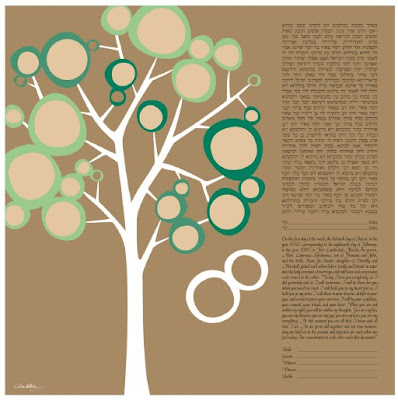 The local newspapers ran the controversial angle of the story and "hounded" the couple after they returned from their wedding in California. It became the talk of backyard barbecues and a lively debate on same-sex marriage with over 200 entries on the Internet.

Overall, however, Rabbi Bender says, the response to the wedding was overwhelmingly loving. "Rachel and I received wedding gifts and heartfelt notes from 250 families. The temple got seven pieces of hate mail."

The controversy aside, Rabbi Bender says she can't imagine not having had a Jewish pre-marital blessing or wedding.

These moments were pure joy," she says, "Our wedding was a natural step for us-a personal decision, not a political statement. Jewish ceremonies are very important to us. Why should we be deprived?"

An Opportunity to Wed
Such weddings are no longer an isolated phenomenon. A growing number of Jewish same-sex couples are choosing to solemnize their relationship with a life-cycle ceremony. Some call it a wedding, some a commitment ceremony, others kiddushin or sanctification.

Within a year, Hawaii may permit lesbian and gay couples to marry. As no state currently recognizes same-sex marriages, it is likely that hundreds of gay and lesbian couples will decide to seal their vows in that state.

A great deal is at stake here. Legal marriage would afford lesbian and gay couples a host of rights and responsibilities currently benefitting heterosexual married couples, among them power of attorney; status of next-of-kin for medical and burial decisions; joint insurance policies; joint leases; and spousal employee benefits such as health insurance annuities, pension plans, social security, and Medicare. Partners would be entitled to take care of one another should either become seriously ill, avoiding tragedies such as the one Sharon Kowalsky and Karen Thompson experienced (see page 20). They would be able to adopt one another's child, as well as secure joint parenting and foster care, a benefit provided by only a handful of states.

Reform and Same-Sex Marriage
The Reform movement is on record as supporting civil marriage for gays and lesbians. In 1993 the UAHC resolved "to oppose state and local statutes restricting the civil rights of gays, lesbians, or bisexuals, and to call upon governments to adopt legislation affording committed lesbian and gay partners spousal benefits; ensuring that lesbians and gay men are not adjudged unfit to raise children; and affording partners the means of legally acknowledging their relationships." Last February, the executive committee of the Commission on Social Action of Reform Judaism passed a motion acknowledging that this means "to recognize legalizing same-sex civil marriage." And last March, the Central Conference of American Rabbis passed a resolution supporting civil marriage for gays and lesbians.

The Reform rabbinate, however, has not yet called such relationships kiddushin. In 1990 the CCAR accepted a report of its Ad Hoc Committee on Homosexuality and the Rabbinate which acknowledged that a lesbian or gay relationship may possess ethical and spiritual value but reserved the special status of kiddushin for monogamous, heterosexual, procreative marriage. That position is now being reevaluated by an ad hoc committee on Human Sexuality.

While advocating for change, the UAHC Task Force on Lesbian and Gay Inclusion realizes that the issue of same-sex commitment ceremonies will, indeed, take time to be fully accepted. Notes Rabbi Julie Spitzer, regional director of the New York Federation on Reform Synagogues and staff director of the Task Force: "While the Task Force members are strong advocates for the full and uncompromising integration of lesbian and gay individuals and families in all aspects of synagogue life, we spent considerable time discussing the issue of how strongly to advocate for kiddushin in our new manual, 'Kulanu-A Program To Include Lesbian and Gay Jews in Our Temples.' Ultimately, we agreed to acknowledge rabbinic authority in ritual matters and to encourage clergy and lay leaders to thoroughly examine the issue in light of Reform Jewish teachings. It was a difficult compromise, but ultimately an important recognition that the task of studying this issue and guiding our congregants is ongoing."

Rabbinic Controversy Remains
Reform rabbis remain divided on the kiddushin question. Rabbi Jeffrey Salkin, senior rabbi of Central Synagogue of Nassau County in Rockville Centre, New York, says, "At this time I do not feel comfortable sanctifying those unions. I support, appreciate, even empathize with these couples. But, because of my readings of Jewish history, tradition, theology, and liturgy, I cannot use the word 'sanctify.'

"I tend to be a traditionalist," he adds. "But as a true liberal, I'm not offended by rabbis who take a different view. No one has asked me yet to perform a same-sex ceremony. Although I wouldn't, I suspect I would refer them to someone who would." 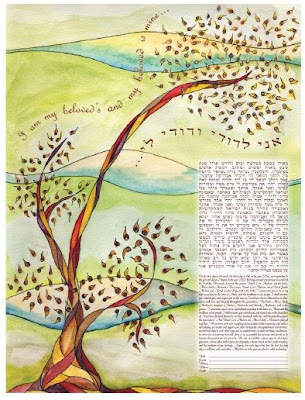 Rabbi Ronne Friedman of Temple Beth Zion in Buffalo, New York will participate in same-sex wedding ceremonies, calling his decision "an intuitive response to what ought to be." He views it as a civil rights issue that he expects will not be resolved in the '90s. "I fear it will be the civil rights issue into the next millennium," he says.

Rabbi Michael Stroh of Temple Har Zion in Thornhill, Ontario believes that Reform rabbis should not officiate at same-sex marriage ceremonies but acknowledges that his position is not an easy one for him. "I know and respect colleagues who are gay or lesbian," he says. "Frequently, their positions on Jewish issues are closer to my own. I do not want to cause them pain. I'd like to say that, as a modern person, I accept homosexuality as the equivalent of heterosexuality. But I cannot. I do not believe that this is the case. Nor do I believe that, from a Jewish point of view, heterosexual and homosexual relationships are equivalent. I'm not saying that homosexuals do not have the right to companionship. I am saying that, at this point, I am not prepared to perform a Jewish marriage ceremony."

Congregants, too, have expressed ambivalence about rabbinic officiation at commitment ceremonies for lesbian or gay couples. "I don't care if my rabbi officiates," says one mother of young children, "as long as my children don't know about it." One Reform congregation permits its rabbi to use the sanctuary for commitment ceremonies but will not permit him to call same-sex couples to the Torah, fearing that the family and guests of the Bar/bat mitzvah might be offended.

In his Rosh Hashanah morning sermon last year, Rabbi Jerome Davidson disputed the notion that same-sex marriage offends family values. "First," he pointed out, "it provides an option for gays other than a life of loneliness, of hiding, that is true to their real identities. Second, they can create a truly Jewish home together, live Jewish lives, and, if they choose, raise Jewish children. Finally, a gay and lesbian union can be an instrument of reconciliation among children, their parents, and their siblings. Having been kept apart by years of continuing fear, stigma, and ridicule, they can come home again."
Posted by DrMom at 10:15 AM