Purim Poetry from A Deviant Artist 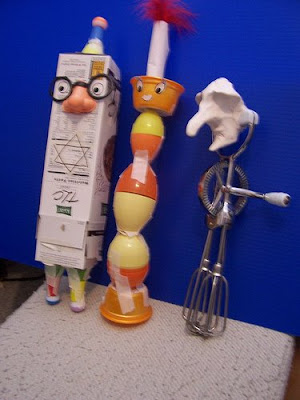 From Flickr contributor dgoboff: Esther is made from egg shapes and cat food containers.
Haman is an egg beater with air dry face. Mordecai is a cardboard box with some egg shapes and cheap ball and cage toys. They'll be covered with paper machie and painted. An inner rod will support the structure. Cord or rod arms to be added

This story ends
With the Right hand (and his 12 sons) dead
Making the Guard the new minister
And with yet another feast
That repeats every single year.
Posted by DrMom at 3:38 PM