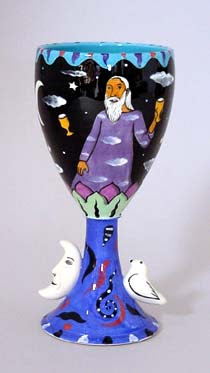 Susan Garson's unique way of drawing and colorful painting breathes life into Tom Pakele's wonderful, sculptural forms. They take the shape of figurative lamps, vases, ritual Judaica, teapots; an everchanging plethora of art objects. Seen in homes, galleries, museums and private collections worldwide. Would you not love to find these items on your seder table?

The Parsha lists the variety of foods which Jews may and may not eat. Throughout the years, there have been many rationales offered for the laws of Kashrus. Some have asserted that they were only a temporarily health measure (for instance, pork was prohibited so that Jews would not be stricken with the disease of trichinosis; and the laws of salt in meat were a way of preserving the meat before refrigeration was discovered.) Thus, they claim, the laws of Kashrus are no longer applicable in our modern age. 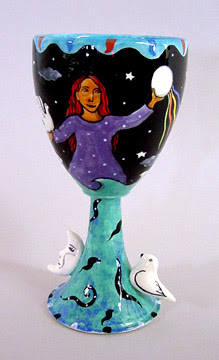 However, while it is certainly true that the Torah is concerned for people's health and sanitation, this is not the only rationale for Kashrus. The Torah is also concerned with our spiritual well-being, and with our inner purity. Therefore, when the Torah tells us to avoid certain foods, it thereby provides for our spiritual cleanliness. Foods which are inherently unclean and disgusting, such as the meat of animals that died of disease, or the products of insects and the unsanitary pig, are not kosher. Similarly, foods of naturally vicious animals, birds of prey and beasts of the forest are prohibited, whereas products of domesticated animals like the chicken and cow are allowed. We are, in a way, influenced by what we eat. 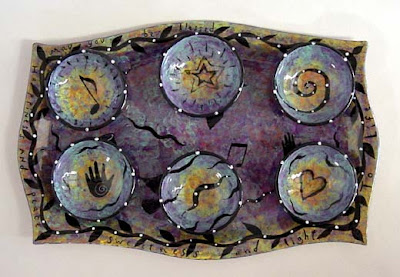 Therefore, we must base our character on the peaceful ways of the animals that are permitted. Because of the spiritual basis for the laws of Kashrus, in addition to the health basis, the laws of Kashrus are not limited to any specific era. They are timeless.
Posted by DrMom at 8:09 AM

Dear Dr. Mom,
I am a felter specializing in Judaica. I have tagged you with an award because I admire your blog. You may view my comments about your blog on my family blog where the tag is. http://pengellypastimes.blogspot.com
You can view the work on my fibre blog www.DeeplyFelt.com
B'Shalom V'Simcha
Helen + ilana = Hi