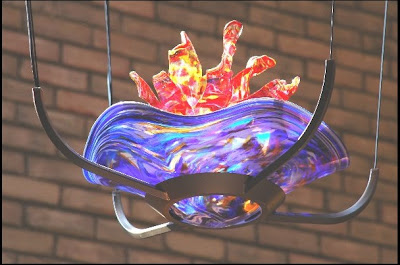 Have you ever been to the Isaac M. Wise Temple Temple in Amberly Village (Cincinnati) Ohio? Originally established by German immigrants in 1840 as the K. K. Bene Israel, Isaac M. Wise became its spiritual leader 13 years later. In 1873 Rabbi Wise founded the Union of American Hebrew Congregations, the umbrella body of the Reform Movement in North America. The original building, The Plum Street Temple, is an architectural masterpiece and the site of rabbinical oridination for the Hebrew Union College. At the suburban campus of the Wise Temple a recent rennovation included a new ner tamid, from an Ohio Glass artist Darren Goodman.

With Parashat Terumah, the major theme of the rest of the Book of Exodus is now introduced. Great detail is given about the construction of the Mishkan (Tabernacle), the portable sanctuary that was the centre of the Israelites' religious life during the years they wandered in the wilderness. The Mishkan was "God's dwelling place amongst the people," where sacrifices where offered and God communicated with the people through Moses and the High Priest.
Very detailed instructions are given to Moses as to how the Mishkan should be built and what materials are to be used. Included among the Klay Kodesh ("holy implements") are the Menorah, the altar for sacrifices, the Ark, and the Holy of Holies. The portion begins with God asking Moses to ask the Israelites to bring Terumah, usually translated as "gifts," meaning something like "contributions" or "donations," but they are to be freewill offerings.
Posted by DrMom at 2:44 PM

oh my goodness Toby, that has to be one of the most beautiful Ner Talmid's I have ever seen. And now...I will go drool over the glass site. You keep putting glass stuff up and I will abandon my clay and go back into the glass studio!