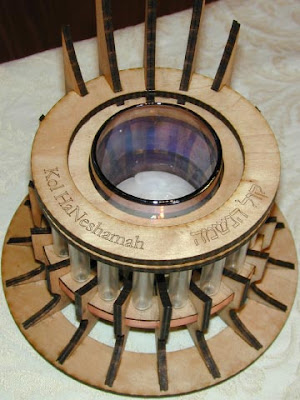 I only learned of the Ner Tamid recently when my son, a cub scout, received an email (via his dad- no email for 7 year olds) about away to earn his religion badge... as we read through it, its very Christian leanings became evident. I asked our pack leader (MOT) what about those who were not Christian and that is how I learned about the Ner Tamid program. Last week my Dad told me he had received the adult leader's Ner Tamid years ago; supposedly I was even there. So in honor of scouts and in recognition of this week's parsha which gives the criterion for sanctuary structures, I will share various artist's versions of the Ner Tamid.

This Ner Tamid was created by Daniel C. Robbins, a designer with Microsoft! Daniel's goal in life (at least states his resume) is "to make the world a better place through more joyful and inclusive design." I think he has succeeded.

From The J. In order to earn the 12 merit badges sewn neatly to his Boy Scout uniform with tiny stitches, Nathan Rayman had to learn CPR, first aid, lifesaving and water skills, as well as communication and personal-management techniques.

To earn the medal he received last month, the Kentfield 14-year-old did what came naturally. He acted as a Jew.

After devoting nearly a year to study and service projects, Rayman received his Ner Tamid (Eternal Light) medal from the Boy Scouts of America's National Jewish Committee on Scouting. Rabbi Lavey Derby presented the medal during a Friday evening service at Congregation Kol Shofar in Tiburon.

"I'm quite impressed [with the Ner Tamid program]," Derby said. "I've never had a real relationship with Boy Scouts. But when Nate came to me to help him [fulfill the requirements], of course I was happy to."

The Ner Tamid program was established in 1966 as a way for scouts to fulfill the 12th point of scout law: "A Scout is reverent...toward God. He is faithful in his religious duties. He respects the beliefs of others."

Derby called Ner Tamid "a wonderful program. It doesn't ask kids to be deep thinkers. But to earn the medal they have to learn a lot about history, tradition and spirituality."

The requirements for the emblem are divided into six sections -- home observance, synagogue worship, Jewish study, the American Jewish community and world Jewry. Scouts must complete several activities from each section -- some are mandatory, others are optional.

For instance, Rayman had to describe the meaning and observance of Shabbat, High Holy Days and other Jewish festivals. But he chose to study the lunar Hebrew calendar, research the five U.S. cities with the largest Jewish populations and write an essay about five sayings from the Talmud's Pirke Avot (Ethics of the Fathers) that are meaningful to him. 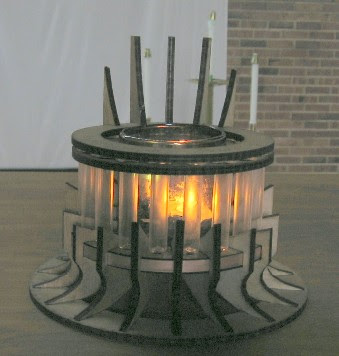 While pursuing the world Jewry requirement, he went further afield, learning about organizations he had not previously known well, including the Jewish National Fund, United Jewish Appeal and Hadassah.

"I knew these names but I never knew what they did," Rayman said.

The medal's requirements exemplify a scout's reverence, he added, because "striving shows devotion in a more obvious way than just thinking or feeling it. It shows a commitment of spirituality and religion to finish the program."

Rayman is one of a small number who receive the Ner Tamid medal each year.

"It's pretty rare [when] anyone earns it. He's the only one in Troop 59 of any religious denomination to earn it," said Rayman's troop leader Shelton Baxter.

"I earned the Protestant one when I was a kid, but it was pretty rare then, too. It's a very self-directed effort," Baxter said.

According to the national offices of the Boy Scouts of America, 804 Jewish youths earned Ner Tamid medals in 1994. By comparison, 35,497 youths affiliated with the Church of Jesus Christ of the Latter-day Saints and 27,232 Roman Catholics earned similar medals. Only 15 Hindus and 39 Buddhist scouts completed the requirements for their religious honors.

Rayman said he chose to aim for this particular honor because "it was an opportunity to accomplish something Jewish and something for scouts."

"It's different," he said. "And it shows a different aspect of scouting."
Posted by DrMom at 2:52 PM