Shakespeare on the Calf... 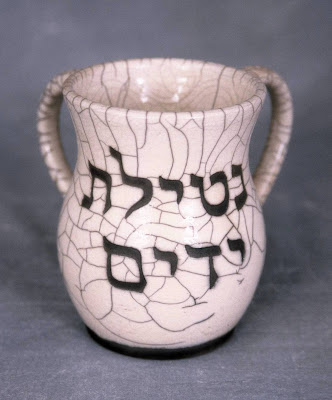 Becca Licha was featured here several months ago. She does lovely work in raku ceramic. Here is yet another of her pieces... another handwashing cup.

The fault, dear Brutus, is not in our stars but in ourselves…

This week we read the Torah portion of Ki Tisa, the story of the Golden Calf. This is one of most dramatic and, for the rabbis of the Talmud, distressing portions in the entire Torah. The problem is acute: according the text of the Torah, our people witness the Ten Plagues, are personally saved at the shore of the Sea of Reeds by God, receive the direct revelation at Sinai—in short, experience God more directly than any other group in history ever has—and then almost immediately turn around and reject God and worship a cow made out of their own jewelry.

No wonder the rabbis of the Talmud and Midrash call this week’s events the Ma’asei Ha’eigel, the awful story of the calf. How can a people given such a clear set of signs and wonders and even direct instruction and command only follow God for 40 days before pursuing such a weak and bovine substitute?

The answer, to paraphrase Shakespeare, is not in our God but in ourselves. We enjoy spectacle, are impressed by it, even awed by it—but as soon as it is gone its effects linger a very short time indeed. What makes us tick as human beings, what keeps us in line, is the very dailiness of regular observances, rules, and schedules, of the kinds of laws and rituals that are very much a part of practical Judaism in subsequent periods. We need both ritual and structure, and until these are provided in a coherent way we tend to flounder—even disastrously so, as we did at the time of the Golden Calf.

The message is, simply, that we need more than grand ideas or sweeping spirituality: we need religion and a Jewish grounding in practice and experience, or we won’t be able to remain both ethical and coherent. Without that focus we begin to worship Golden Calves of every kind, from our work to our pastimes to our often unfortunate obsessions with power or control.

This week, try to incorporate a Jewish practice you have not previously done, a bit of Torah study or prayer or ritual or Tzedakah you haven’t made a regular part of your life previously. Doing so will help you connect to the true God, and to avoid the danger of worshipping your own Golden Calf. (Rabbi Samuel M. Cohon)
Posted by DrMom at 10:25 AM