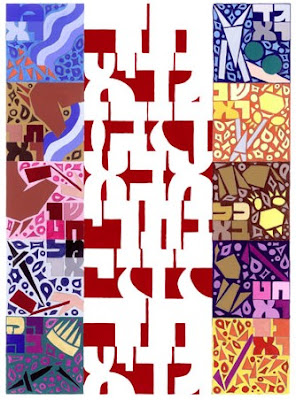 Rabbi Matthew Berkowitz is an educator and artist; he has designed and created the 2006 limited edition Art Haggadah. He interpreted the Haggadah in rich vibrant colors which invites the viewer to participate in an inspiring Seder experience. Berkowitz's haggadah is complete with intricate papercut designs, handmade endpapers, and landscape-which all echo the natural beauty of the Holy Land. This is his rendition of the Ten Plagues..

It is no secret that historians have long tried to give naturalistic explanations of the ten plagues. I recently reread James K. Hoffmeier's book Israel in Egypt, in which he continues that tradition. This always made me uncomfortable. I vividly recall as a teenager, arguing with Jules Gutin about this topic. He asked me what is wrong with saying that the plagues could be explained within nature and I responded that I'm not sure, but there's got to be something wrong with it. Well, maybe not. The following is from R. Joseph B. Soloveitchik, The Emergence of Ethical Man, pp. 187-188:

The supernatural miracle is not very welcome in the covenant society. We prefer the regular flow of life. The Halakhah is completely integrated with the natural process. It never takes cognizance of any causalistic anomalies. Yet the central theme of the exodus tale is the miracle.

What is a miracle in Judaism? The word "miracle" in Hebrew does not possess the connotation of the supernatural. It has never been placed on a transcendental level. "Miracle" (pele, nes) describes only an outstanding event which causes amazement. A turning point in history is always a miracle, for it commands attention as an event which intervened fatefully in the formation of that group or that individual. As we read the story of the exodus from Egypt, we are impressed by the distinct tendency of the Bible to relate the events in natural terms. The frogs came out of the river when the Nile rose, the wind brought the locusts and split the sea. All archaeologists agree that the plagues as depicted by the Bible are very closely related to the geographical and climatic conditions that prevail in Egypt. Behind the passages in the Bible we may discern a distinct intention to describe the plagues as naturally as possible. The Bible never emphasizes the unnaturalness of the events; only its intensity and force are emphasized. The reason for that is obvious. A philosophy which considers the world-drama as a fixed, mechanical process governed by an unintelligent, indifferent principle, may regard the miracle as a supernatural transcendental phenomenon which does not fit into the causalistic, meaningless monotony. Israel, however, who looked upon the universal occurrence as the continuous realization of a divine ethical will embedded into dead and live matter, could never classify the miracle as something unique and incomprehensible. Both natural monotony and the surprising element in nature express God's word. Both are regular, lawful phenomena; both can be traced to an identical source... READ THE REST OF THIS BLOG POSTING HERE.
Posted by DrMom at 10:23 AM

I'm also popping in to let you know that you've been tagged for the You Make My Day Award.

I really enjoy your blog. I learn a lot and read you blog evry day.
Thank you.
Shabat Shalom from Israel