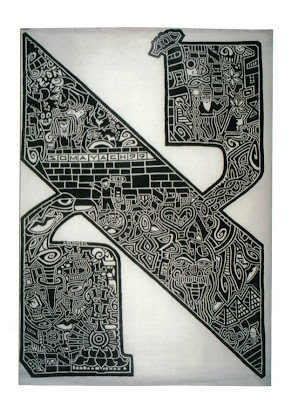 David Singer created the Black Fire Gemetria to delve into the deep meaning of the ALEF BET. Here is his alef. THE MAIN INTENTION WAS TO ENCAPSULATE THE DEEPER MEANING OF THE HEBREW LETTERS AND THE KNOWLEDGE THEY REPRESENT IN VISUAL FORM... Please exlplore his blog for even more information.


Let's say the Supreme Court of the United States allows the chief justice of the great state of Alabama to keep his 2-ton monument to the Ten Commandments in his office building in Montgomery.

Even the Bible contains two versions, one in Exodus 20:1-17 and a slightly different one in Deuteronomy 5:6-21.

There are, of course, various English translations of those ancient Hebrew texts.

Further complicating the commandments are the fact that neither Exodus nor Deuteronomy neatly number the no-nos from one to 10.

For example, the Alabama monument to "the laws of nature and of nature's God," uses the "thou shalt" of the King James Bible rather than the "you shall" of the New Revised Standard Version.

The monument in Montgomery slashes its version of the Tenth Commandment down to a mere four words:

Thou Shalt Not Covet.

What King James really says is a bit more specific:

Different denominations use various numbering systems because they differ on what to include in the First and Tenth Commandments.

Then there is the question of what the commandments were meant to mean.

For example, the First Commandment that "Thou shalt have no other gods before me" indicates that it was OK to have gods other than Yahweh, so long as Yahweh was No. 1.

"Thou shalt not commit adultery" is either commandment six or seven and originally only forbade sex with a married woman.

Married men were free to have sex with other females. That's because establishing paternity, not maintaining sexual purity, was the reason for that commandment.

Then there are the commandments in the next chapter of Exodus, which allow fathers to sell their daughters into slavery (21:7) and say that "whoever curses his father or his mother shall be put to death" (21:17).

Neither of those commandments is included among the Ten Commandments currently residing under the rotunda of the Alabama Supreme Court building.
Posted by DrMom at 3:09 PM