You really can make your dreidel out of clay

Learn how to here.

Here is some additional inspiration.
From TOP to bottom we have Switzerland's Perlengaby and Shlomit, and Squashie of Israel (note the פPeh and not the ש Shin on her sivivonim) 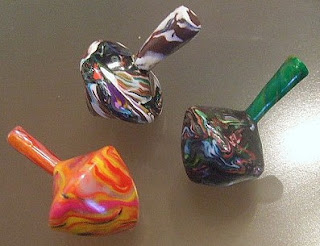 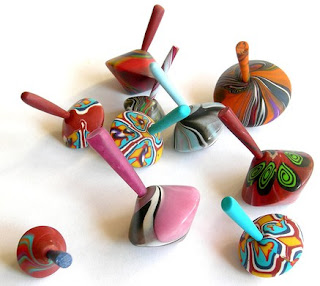 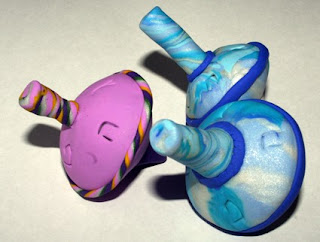 The Dreidel game is played by giving each player a number of coins or candy pieces. Before spinning the dreidel, each player puts a fixed proportion of the amount of coins received into the "Kupah" or kitty. Each player in turn spins the dreidel. When the dreidel falls, it will fall on one of the 4 letters. According to the letter, the following will happen:
Nun - no win / no lose
Gimmel - take all (from the kitty)
Heh - take half (from the kitty)
Peh or Shin - lose (what you deposited)

The game continues until players run out of 'funds' or agree to stop (anyone losing all funds is out of the game). 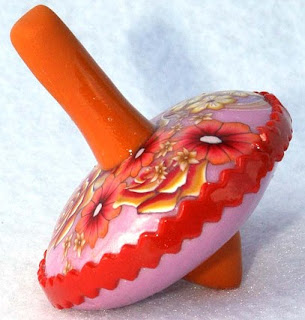 The dreidel game was popular when Antiochus ruled. Jewish people, struggling to keep their faith alive, would gathered together to study the Torah, outlawed by Antiochus. They would keep the dreidel near by so if soldiers appeared they could hide their scriptures and pretend to play with the dreidel. In Israel the dreidel is called a sivivon. The yiddish word "dreidel" is derived from the German word "drehen", or "turn".

And of course we can't forget Naama Zamir!

I would LOVE to see what YOU create.
Posted by DrMom at 1:50 PM