Miketz: Joseph and the Evil Eye

Like the evil eye pendant worn by the Hamsa or Hamesh hand, is used as a protective amulet by both Jews and Muslims. The name hamsa is derived from the Semitic root meaning "five." The eye in hand is considered a powerful talisman againt the 'evil eye,' and is usually worn around the neck or hung on walls or over the doors of homes and businesses. These hamsot are from an Israeli of Iraqui descent, Kamy Raviv, who creates her work under the name of “Yad Nee’ma”. The artwork is completely hand-made using metallic yarns, beads and delicate cloths. The works are done individually, slowly and passionately, to portray their message and achieve the illusion of depth. 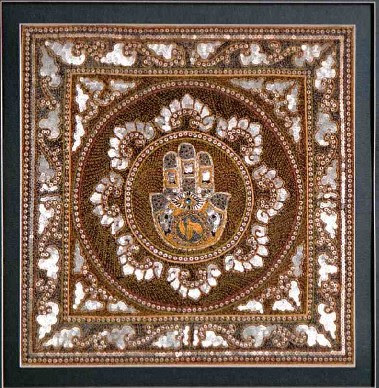 Rabbi Yochanan, the third century scholar, had an unusual custom. He used to sit down outside the town mikve (ritual bath). This way, he explained, the Jewish women will see me as they leave the bath and will have children as beautiful as me. Rabbi Yochanan's colleagues asked him: Aren't you afraid of the Evil Eye?

"'I am descended from Joseph,' he replied, 'and the Evil Eye had no power over him'" [Berachot 20a].


Apart from the issue of Rabbi Yochanan's beauty, this story raises some interesting questions. What is the Evil Eye? Is it just a primitive superstition? And why was Joseph, more than any other Biblical figure, immune from it? 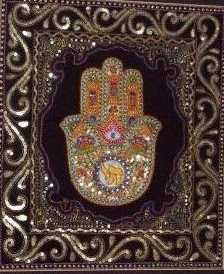 The Talmud explains that Joseph merited protection from the Evil Eye since "his eye did not wish to benefit from that which did not belong to him." Despite Mrs. Potiphar's attempts to seduce him, Joseph remained faithful to God and his employer. Truly an act of great moral integrity - but what does this have to do with the Evil Eye?

Rav Kook explained that the Evil Eye is an example of how one soul may affect another through unseen connections between them. We are all influenced by our environment. Living among those who are refined and righteous will have a strong positive effect upon us, while living among the crass and corrupt will have a negative one. The Evil Eye is the venomous impact from malignant feelings of jealousy and envy of those around us.

A person who has hardened his inner resolve and does not allow himself to be misled from the correct path, despite pressures from others - he has built a 'firewall' protecting his soul from external influences. The Biblical hero who most prominently symbolizes this strength of character and refusal to be led astray is Joseph. Seventeen years old, young and handsome, estranged from the protective framework of his own family and culture, a slave propositioned by a powerful and attractive woman - Joseph beat all the odds and remained faithful to his ideals. Joseph determined that he would not be swayed by his surroundings, no matter how persuasive. Through his heroic actions, he merited that the Evil Eye would have no power over him and his descendants.
Posted by DrMom at 3:38 PM