The Family of Joseph, as depicted by the painter Nathan Moskowitz. "This painting is in essence about Hebraic and Egyptian blessings, shared geometric symbolism and rituals, and the powerful subliminal influence which the colossal visual imagery of Ancient Egypt had on Israelite theology and culture." 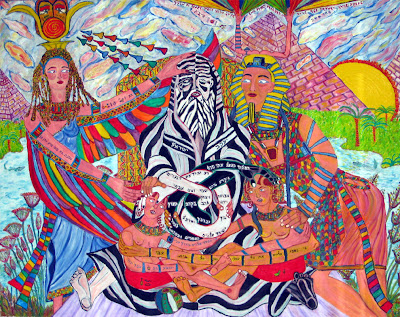 Parshat Vayechi (Genesis 47:28-50:26), the final portion of the first book of the Torah, describes Jacob's actions immediately preceding his death in Egypt, beginning with his making Joseph swear to bury him in the land of Israel. Jacob then gives Joseph's two sons, Menashe and Ephraim, a special blessing which confers upon them the elevated status of being two separate tribes amongst the Children of Israel. Notwithstanding Joseph's protest, Jacob insists on giving the younger Ephraim the right-hand position of primacy during the blessing, stating that Ephraim would be greater. Jacob then proceeds to give each of his other sons their individual blessing, in accordance with their own unique character traits and missions. Jacob passes away at the age of 147 and is brought by his sons, accompanied by a great procession of Egyptian royalty, to the land of Israel where he is buried in the M'arat HaMachpelah alongside his wife Leah, parents Isaac and Rebeccah, and grandparents Abraham and Sarah. Upon their return to Egypt, Joseph's brothers fear that he will finally take revenge now that their father is dead. Joseph reassures them that he bears no hard feelings, stating that his being sold into slavery was all part of the Divine plan. The Torah portion concludes with Joseph's death and the Jewish people's promise to carry his bones with them to Israel when they are finally redeemed by Hashem.
Posted by DrMom at 12:26 PM